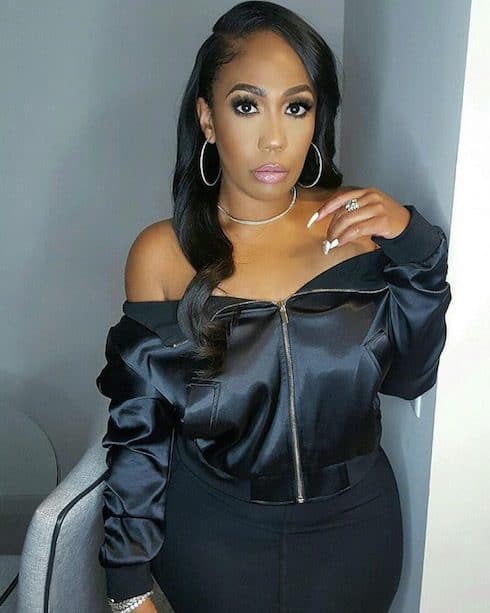 Love & Hip Hop Atlanta‘s Keely The Boss is most definitely that. The Detroit native and Atlanta transplant has a well-earned reputation for ambition, hard work, and trying to keep the drama to a minimum when it comes to the performers under her wing.

In fact, Keely The Boss — born Keely Hill — let her intentions be known well before her LHHATL Season 7 debut. The very first words she spoke as a member of the show’s 2018 cast were full of the energy and focus she’s known for: “I don’t take no for an answer,” she said, upon being announced as a new cast member. “I won’t back down. I don’t let up. I’m going to go in for the kill. My morals are intact, but I will do whatever is in my power to get the job done.”

Keely, 33, already has a long background in music management. Additionally, she either is or has been an entrepreneur; a tabloid queen (Keely runs The Petty Punch, her own gossip blog); and, above all, a mother to her three-year-old son Xavier. So where did the nickname “Keely The Boss” come from?

We reached out to Keely, who set the record straight about her straightforward sobriquet.

“I started going by that in 2011,” Keely told us, “when I started working for myself full time as a entrepreneur owning my own management, marketing, and PR company. I had a lot of clients and was doing a ton of business and people just started referring me to as ‘The Boss Lady’ and then they shortened it to Keely The Boss. From there the name just stuck.”

True to her well-networked background, Keely added that nobody on the Love & Hip Hop Atlanta Season 7 cast seemed to be put off or on defense because of her nickname — in large part because she already knew so many cast members.

“I originally met Erica Mena her first season of LHHNY back in 2011,” Keely explained. “I know Shooter through Rocko, who is family of mine, and I ran his record label A1 Recordings….Botchey and I even met thru the industry.

When I’ll Love You Until Past The End Of Time…? Happy 3rd Birthday To My Superstar Son! #MommysBoy #FamilyFirst . . . HAIR: @1HairPerfection NAILS: @IAmPrincessNails

“Same thing with Joc, and even my son’s father,” Keely added. “Everyone who knew me or knew of me was because of me working in the business. Everyone also knows I handle my business and always do my best to get the job done.”

Of course, sometimes getting the job done is harder than it seems — especially when VH1’s cameras are rolling. Keely’s already spent a considerable amount of screen time this season trying to mediate the various feuds between Stevie J’s stable of artists. And it looks like the rest of the new episodes could become a season-long game of staying out of the crossfire, especially when some of Keely’s own friends and associates get involved…

Is Fargo really based on a true story?

Miley Cyrus says she does dumb stuff when she’s messed up: “I am so f***ed up”