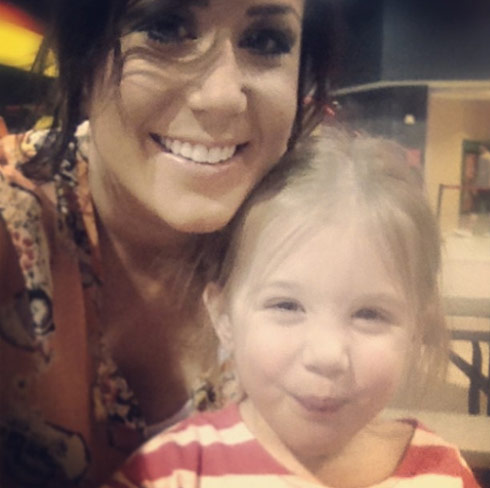 It took 4 seasons and quite a haul for Teen Mom 2 cast member Chelsea Houska to finally realize that having baby-daddy Adam Lind in her life romantically probably wasn’t the best thing for her or her daughter Aubree. Now that she’s climbed that mountain, Houska is trying to manage the current co-parenting situation the best she can as Lind labors in a work release program for multiple DUI arrests.

As MTV readies to air the Teen Mom 2 Season 4 Reunion special tonight, Chelsea addressed being called a bad co-parent by Adam as well as how she’s handling the situation of Lind being an expecting father again in an interview with In Touch.

When asked whether or not she was shocked to learn that Lind is expecting a baby with girlfriend, Taylor Halburt (listen to the audio of that revelation from a court hearing including the expected due date here):

I was shocked when I found out that he was expecting another kid. He told me right away when he found out and I was just so upset for Aubree. I’m worried. What if that child gets more attention from him? I don’t want her to feel left out or anything like that… I’m happy for them. I just feel that he’s in a bad place right now and it’s probably not a good situation to bring a child into – especially since he has one.

When asked about Adam’s claims that she’s a bad co-parent:

Well, he is in jail but on work release right now so he’s not able to see Aubree as easily as he could have if he wasn’t in jail, so I feel like he is just trying to make it seem like my problem or make me look bad because he’s in a bad situation himself.

That (Adam) would learn something from being in jail and being away from Aubree, grow up, stop getting in trouble and we could get along and he could see Aubree and she could be part of her sibling’s life and that everyone would be happy. That would be the perfect scenario.

A Teen Mom 2 ‘Being Vee’ Torres special may be headed our way soon!