The long wait has come to an end! Kanye West revealed the first public picture of his adorable baby daughter, North West, while appearing on the season finale of The Kris Jenner Show.

As could be expected when Kim Kardashian is the mother, the baby is pretty darn beautiful. Without further ado, here she is… 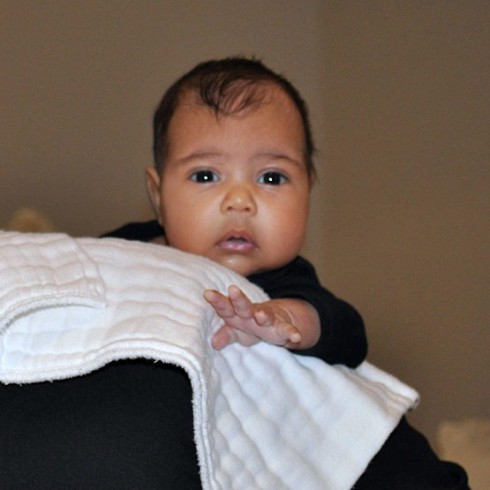 Baby North is certainly a beautiful blend of her mother and father. I mean, those eyes!

While stopping by The Kris Jenner Show, Kanye also discussed how fatherhood has changed him. He even mentioned the infamous Taylor Swift VMA incident… And this may qualify as the apology Taylor’s been waiting for!

“The last thing I would want for my daughter is for some crazy drunk black guy in a leather shirt to come cut her off at an awards show,” Kanye joked.

As many remember, Kris Jenner was criticized earlier this summer for sharing a picture of her holding a dark-haired baby and teasing “You never know who’s going to stop by The Kris Jenner Show.”

Although North never made an in-person appearance, it was revealed earlier this week that Kanye was going to share the picture. That surely boosted the ratings for the season finale — which was particularly important, because the fate of Kris’ show hangs in the balance.

This also ends two months of speculation about how Kim and Kanye’s daughter would be introduced to the world. The couple was reportedly offered $4 million to share the first pictures with an Australian publication, but their family allegiances ultimately won out.