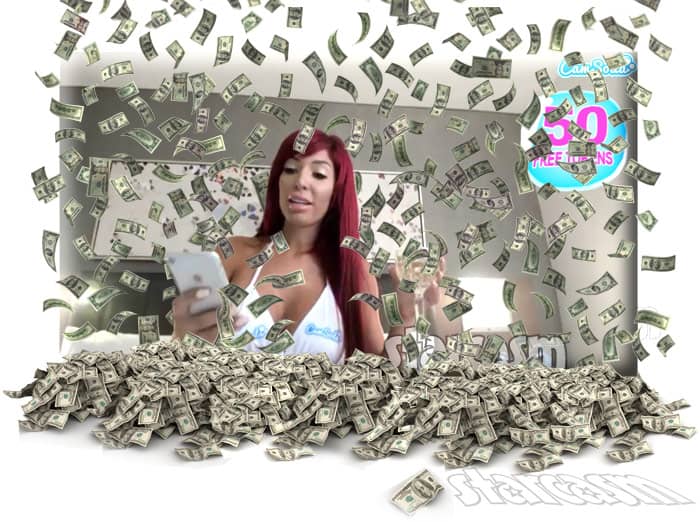 Teen Mom OG star Farrah Abraham made her adult live streaming debut on CamSoda Wednesday night and it appears that the X-rated sessions were a HUGE success as the sheer number of viewers caused the website to crash at least twice!

I tuned in for the show at the designated start time of 9/8c, but Farrah didn’t appear until around 8:15. Prior to that she was in the chat room teasing her fans by asking them what she should wear. (One piece or a bikini? Versace heels or red bottoms? Most in attendance were choosing option C: Neither.)

Eventually, Farrah’s live stream started and she was sporting a CamSoda bikini that didn’t seem quite up to the task of holDDing her Abrahamplified assets back. Farrah was not nervous at all as she began to talk dirty in response to comments being made in the chatroom. She quickly whipped out one of her sex toys and explained that one side was cast from her anus and the other from her vagina. Then she started licking both and chastised those folks out there not willing to give their tongues a proper workout in the bedroom.

The inquisitive journalists in the chatroom were curious if Farrah would “bang a chick,” and her response was uniquely Farrah: “I’m a lesbian for myself, but that’s about it.” 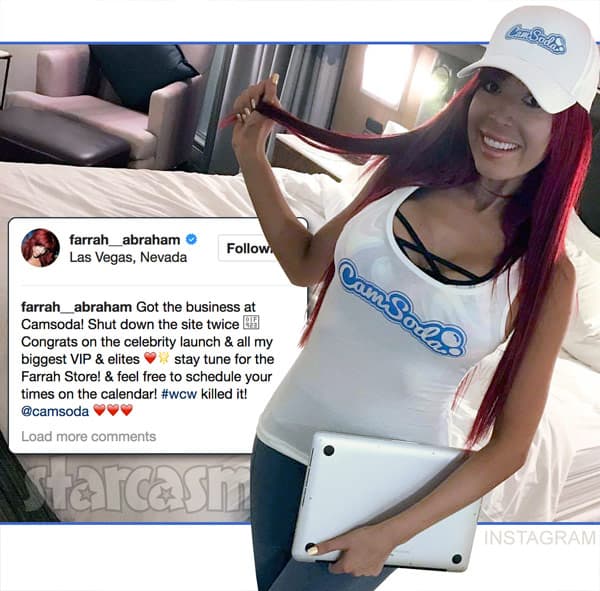 The free live stream sported an ad for a “Golden Ticket Show” that started at roughly 9:30/8:30c, which cost 200 CamSoda tokens to watch. The chat room began filling up with notifications of viewers purchasing Golden Tickets as Farrah continued to make sweet oral love to herself and joke with the fellas in the chatroom.

We cannot link directly to uncensored photos from Farrah’s CamSoda live stream, but you can click here for a link to a VERY NOT SFW photo album. 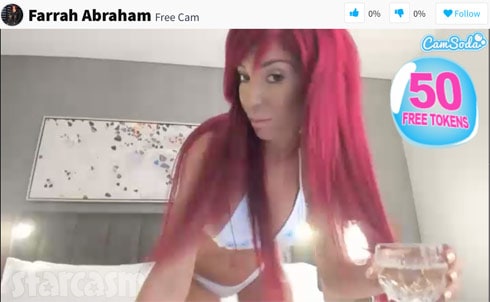 If you’re curious about just how much money Farrah made for her two hours of work, I did some rough math: Her first Golden Ticket Show had just over 300 viewers, and her second had just over 170. Each of those viewers used 200 tokens, which cost $20.99 in the website’s store. So, $21 times 470 viewers equals $9,870. 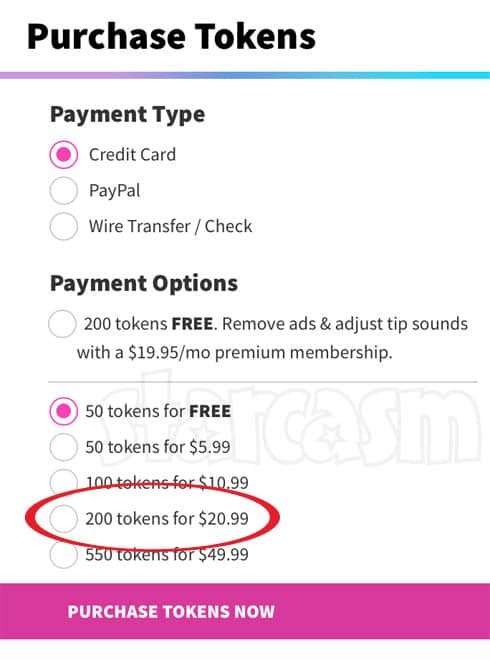 I should point out that a lot of the viewers may have been “regulars” who purchased their tokens in bulk or through special promotions. I should also point out that A LOT of those in attendance were first-time viewers who were there to see Farrah, and those folks probably just purchased the 200 tokens deal.

Two other factors to remember are that it is still unclear just how much of the take Farrah will receive, although I am guessing it is a pretty high percentage given the incredible exposure she is bringing to the site. The other factor is the fact that viewers are allowed to “tip” tokens at any time, and the tips were rolling in throughout Farrah’s live streams. From what I could tell, the bulk of the tokens were from Golden Ticket purchases, but I would say that the tips were roughly an additional 25% or so. That would bring the total up to $12,337.

OK, let me do the math here… Let’s just say Farrah was bringing home 75% of the revenue generated from the live streams. If she did two shows (worked two hours) a night, five nights a week at the same rate, she would be bringing home $46,265 a week. That equates to $2,405,812 a year. Wow.

Although Farrah isn’t quite up to five nights a week yet, she has announced that she will be back for more — and not just live streaming. “Stay tuned for the Farrah store,” she announced on Facebook and Instagram.

On a side note, thanks to our tweets about Farrah’s upcoming appearance on CamSoda and Farrah’s retweets and responses, we were tagged in a lot of the replies. Of course there were lots of “wh0re” comments and all that, which was to be expected. But I was surprised by all of the hateful comments (95% by women) about Farrah’s vagina — which essentially equates to vaginas in general. All of the roast beef references and animated gifs of people throwing up, it was a bit unsettling.

Whatever you think of Farrah, I can assure you that her vagina is not disgusting looking (whatever that even means) unless you think pretty much every vagina is disgusting looking. Please know that your comments and descriptions about Farrah’s lady parts have an impact on other women reading them, and those comments will only make those women who are insecure about it even more so. Please, criticize Farrah’s decisions all you want, but I discourage you all from attacking her (or anyone else) for their physical attributes that they don’t really have much control over. And for those of you that still buy into the myth that lots of sex can “wear out” a vagina or whatever — even in your false reality, there’s not much reason to assume Farrah would be any worse for wear than most women her age. She was quite open in her book (and in her sex tape) that she often engages in anal intercourse, for one thing. For another thing, it’s not as if she is dating new men every other week or whatever — which would be fine. Do these same folks make “throwing a hot dog down a hallway” comments about women who have had more than one child? That would be more accurate than saying the same thing about Farrah, physiologically speaking.

Bleh – sorry about the rant. I was just reading through all the hateful comments directed at Farrah and it was frustrating how much of it seemed like thinly veiled misogyny and/or self loathing. I’ve been doing this job a long time and I’ve learned that the biggest danger about saying hateful things to someone isn’t how it makes that person feel, but how it makes others feel that read it and realize they aren’t that dissimilar from the subject of the hate. If you think Farrah is immoral for rubbing a vibrating metal and plastic object on her vagina in front of an internet camera, then call her out on that by all means. Do you think it was silly of her to get those huge breast implants or lip injections? Let her know. Do you think her vagina is disgusting looking and vomit-inducing? You might want to look in a mirror — and not just at your face.