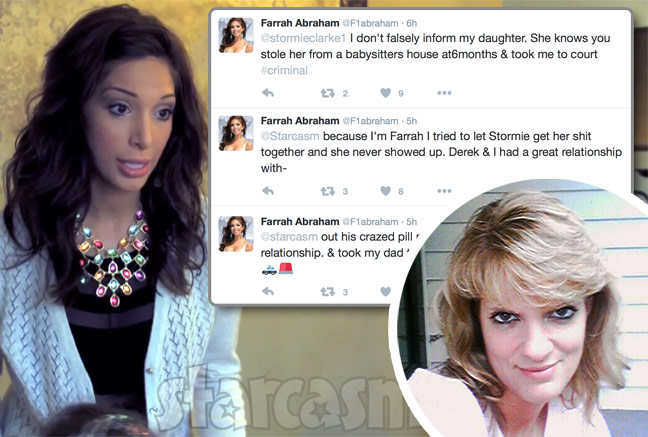 Last night we reported that Derek Underwood’s mother, Stormie Clark, is very upset that MTV labeled Derek’s step-mother as his mom on last week’s episode of Teen Mom OG. In addition, Stormie continued to criticize Farrah Abraham, both for misleading Sophia about Stormie’s identity, and for not allowing Sophia to meet her great-grandmother Rose.

The post did not escape the all-seeing eye of Farrah Abraham, and she took to Twitter and Instagram to respond. “I don’t falsely inform my daughter,” Farrah tweeted. “She knows you stole her from a babysitters house at6months & took me to court,” she added, along with the hashtag #criminal.

Farrah posted the same comment with a screen cap of our Stormie story on Instagram, but continued to write: “& you wonder why Debbie is more of a good role model as a grandparent then you will ever be…. Believe me Sophia knows it all #stoplieing”

@Starcasm because I'm Farrah I tried to let Stormie get her shit together and she never showed up. Derek & I had a great relationship with-

@starcasm out his crazed pill popping mom who lied and upset our relationship. & took my dad to court she kills people & ruins families

And if you were wondering what Farrah is talking about when she accuses Stormie of stealing Sophia from a babysitter’s house at 6 months, I assume that is in reference to the first time Stormie met Sophia. According to Stormie, the meeting was purely by chance when she was in a park in Council Bluffs, Iowa and Sophia happened to be there with her babysitter. Stormie was able to interact with Sophia, and even take some photos — including this one: 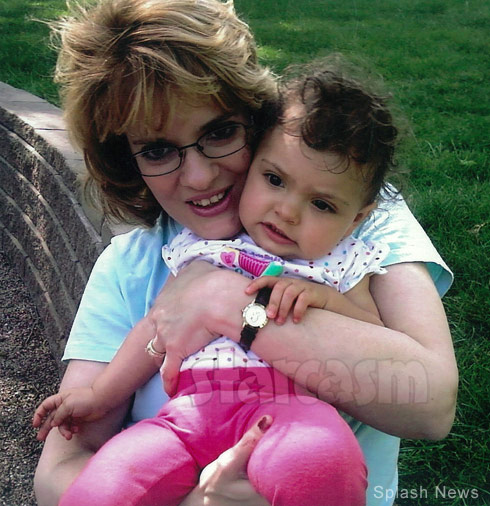 This is how Stormie described her meeting with Sophia:

“It was like a blessing from God,” said Stormie, whose son Derek Underwood died two months before Sophia’s February 2009 birth. “I couldn’t help but cry. When I held Sophia, she never cried or wanted to get down. To me, it was like she knew that we were her family. She was acting like we had been in her life forever. I said to her, ‘Hi, I’m your Grandma. Grandma loves you.’”

On a more positive note, I’m sure Farrah’s mom Debra Danielsen will be pleased to know Farrah said she “is more of a good role model as a grandparent [than Stormie] will ever be.”

UPDATE – Scratch that positive note. Commenters have pointed out the very obvious fact that Farrah was referring to Derek’s step-mom Debbie, and not her own mom, Debra. I’m not sure how I completely flubbed that one! Maybe I was just REALLY thirsty for some sort of silver lining?

UPDATE – Stormie has since returned to Twitter to respond to Farrah, and she isn’t pulling any punches either! Click here to read all that she had to say and to see more photos of Stormie with Sophia.