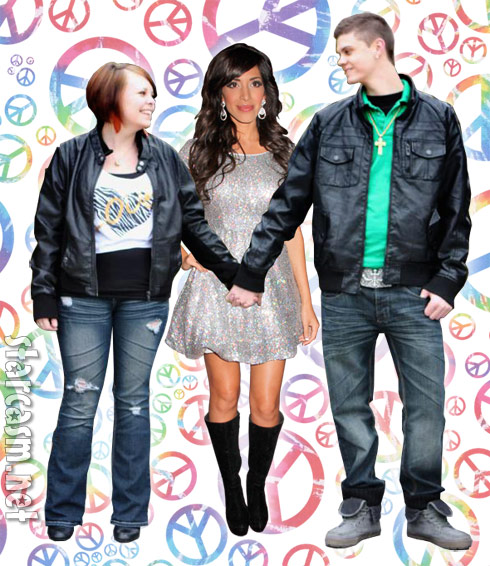 While peace talks in the rest of the world seem to be failing miserably, it appears that Dr. Jenn Berman has somehow miraculously ended the Teen Mom civil war between former cast mates Farrah Abraham and Catelynn Lowell and Tyler Baltierra. The historic event occurred during the taping of the Couples Therapy Reunion Special yesterday, and although we won’t know what exactly happened until the Special airs September 9 on VH1, we did get to see the “peace, love and understanding” fallout on Twitter:

I'm so honored to have been apart of this EPIC reunion & to clear the air! Mad respect @nikrichie @ShayneDahlLamas @F1abraham @realkcijojo

@F1abraham After all the animosity, I want you to know I have no resentment toward you. I pray that you continue to better yourself and do

@F1abraham …what your REALLY passionate about. Good luck Farrah, out of everyone, if you have a goal, I know you will accomplish it

@F1abraham was so nice seeing you and cleaning the air much love!

@CatelynnLowell much love &best wishes – I'm happy we got to talk

@F1abraham @CatelynnLowell Thank you, much appreciated! Let us know when the restaurant opens, we would love to come!

Apparently Dr. Jenn needs to expand her scope with another reality show titled Celebrity Peace Talks with Dr. Jenn! It would work the same way as Couples Therapy, but instead of couple sin relationships, it would be feuding celebrities forced to live in the same house where they receive counseling. (I started that sentence as a joke, but by the time I finished it I sincerely think I had a million-dollar idea! Could you imagine a house with Bethenny Frankel, Jill Zarin, Justin Bieber, Orlando Bloom, Joe Gorga, Joe Giudice, Brandi Glanville and LeAnn Rimes?!? Yeah, I know the Justin Bieber and Orlando Bloom possibilities are slim, but I wanted a couple of marquee names to sell my pitch!)

The Couples Therapy with Dr. Jenn Reunion Special airs on VH1 on September 3.

TEEN MOM PREVIEWS Amber gets a surprise, Tyler opens up about Catelynn