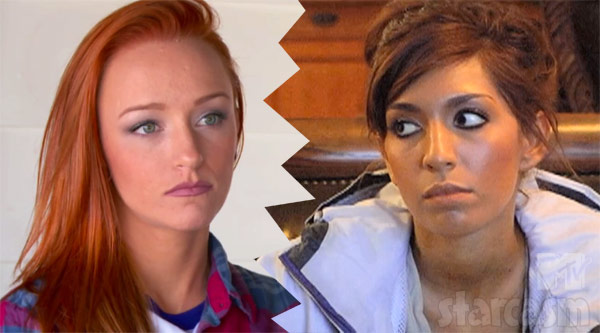 On tonight’s episode of Teen Mom OG tempers flared as the cast members united in New York City to do publicity for the series and film the after show specials. In a truly meta moment we got to see Farrah Arbaham watching the scene in which show producers told Maci Bookout that they were bringing Farrah back. As you probably know, Maci’s reaction was to quit the show. (She would eventually agree to finish out the season, but she refused to allow MTV to film Bentley for the remainder of the episodes.)

After Farrah awkwardly watched the scene, she later met up with her co-stars as they all ate around a large table. Things got VERY heated VERY fast between Maci and Farrah — and that on-screen drama spilled over to Twitter as Farrah and Maci were both live tweeting the episode.

Farrah’s first comment came after Maci and Taylor were seen talking about how Amber Portwood and Matt Baier were already engaged, as were Catelynn Lowell and Tyler Baltierra:

Happy I'm not rushing being engaged or having babies

Farrah then addressed the awkward side hug when she and Maci first reunited:

During the dramatic table scene, Maci mentioned that she felt like she was on Bravo instead of MTV:

I feel like I'm watching an episode of Real Housewives of Teen Mom OG right now.

Amber also tweeted her support of Maci’s actions on the show when she refused to talk with Farrah because of Farrah’s tone:

Maci’s mom Sharon Bookout chimed in as well. She retweeted this message:

And then shared this text graphic:

Good gracious!!! Perhaps all these tweets will be featured in an upcoming episode? 😉

UPDATE – Ryan Edwards and his mom Jen Edwards also responded to Farrah’s on-screen antics and tweets. Ryan responded to Farrah’s comment above about Maci still being scared (as well as “lieing” and being immature) by tweeting, “wtf does this even mean I think when you take d*ck in your A** you shouldn’t be able to talk about anyone.”

And there is one thing you can't buy and that is CLASS !!!

Let's talk about being mature we don't sit on our phones and tweet about you 24/7 we forgot you even existed. #ByeFelicia #endrant