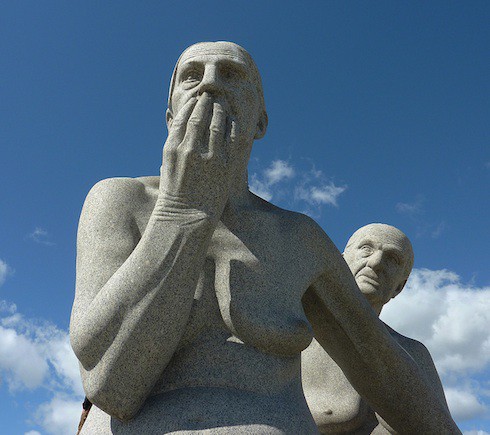 An art professor at the University of California-San Diego is under fire for his decision to encourage students in one of his classes to perform their final exam in the nude. Ricardo Dominguez, an associate professor of art at the esteemed school, said he suggests that students in his Visual Arts 104A class to give their final presentations while in the nude, but that nudity is not a requirement.

The class is titled “Performing the Self.”

The unidentified mother of one of the students said that her daughter told her the nudity was a requirement, and that she was disgusted by such a thing: “There’s a perversion going on here,” she said. “The fact he is a professor and has control over these students, I think he’s taking it way too far.”

But the school administration–up to and including the chairman of the Visual Arts department–support Dominguez’s decision, and say that the mother was misinformed. Chairman Jordan Crandall released an explanatory note:

It has a number of prompts for short performances called ‘gestures. These include ‘Your Life: With 3 Objects and 3 Sounds’ and ‘Confessional Self,’ among others. Students are graded on the ‘Nude/Naked Self’ gesture just like all the other gestures….There are many ways to perform nudity or nakedness, summoning art history conventions of the nude or laying bare of one’s ‘traumatic’ or most fragile and vulnerable self. One can ‘be’ nude while being covered.

And Dominguez himself pointed out that students who did take the nude route would do so in a dark room, lit only by candles.

Dominguez has been teaching the class this way for 11 years, and says he’s never received a complaint about it. Is there something to complain about?

(Photo credits: David via Wikipedia; Lips and Gasp via Flickr)

Is Kim Kardashian gonna be on The Simpsons?