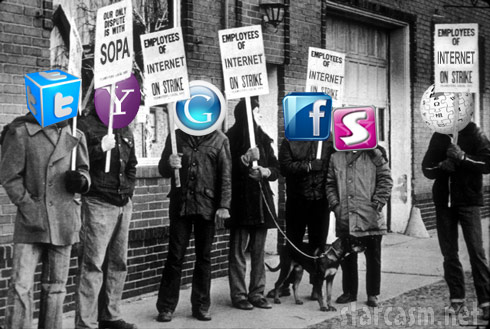 When The House of Representatives meet on January 24 they will be served with a heaping helping of hot potato in the form of the SOPA (Stop Online Piracy Act) bill. SOPA is a piece of legislation aimed at cracking down on internet copyright infringement by granting “copyright holders sweeping powers to force websites hosting allegedly-infringing content offline without the need for a trial or even a court order,” says ExtremeTech. “Search engines could be ordered to de-link sites, payment processors to suspend financial transactions, and DNS providers to prevent site access.”

As you might imagine the legislation has a number of internet companies concerned, including the NetCoalition trade association, headed by Markham Erickson and including members such as Google, Facebook, Twitter, Yahoo!, eBay and others. Markham reveals the organization has been considering a “nuclear option,” which would involve all of the sites in the NetCoalition shutting down simultaneously.

There’s been no formal decision on the matter, and the companies in question obviously risk consumer anger and backlash over any suspension of services. There is, however, safety in numbers — and a few simple sentences identifying why the blackout is in place will ensure that the majority of the rage flows in the proper direction.

It’s a trump card that the likes of the MPAA and RIAA have no way of matching. There’s solid technical data behind the tech industry’s claims that implementing SOPA could damage the function of the internet, and plenty of evidence (some of it just weeks old) that copyright holders will abuse existing judicial processes to eliminate content they don’t like. The MPAA and RIAA are willing to talk about jobs lost to piracy in the abstract, but won’t (and can’t) promise that passing SOPA will allow them to hire thousands of Americans or create jobs in a statement they’d be held accountable for fulfilling.

The list of web sites and companies openly opposing SOPA continues to grow, thanks in large part to a movement started on reddit.com in December calling out GoDaddy.com for supporting the bill. They recommended people and businesses relocate their domains to other servers in protest, which resulted in more than 36,000 sites doing just that. Eventually Go Daddy changed their tune a bit and issued a concise statement in opposition to the bill.

Here are a list of other web companies that have openly expressed their opposition to SOPA and who will likely be part of the black out if it occurs:

As you might imagine, most of Hollywood as well as the RIAA claim the bill is absolutely necessary to preserve copyright laws and intellectual property rights. They argue that sites like Google, Yahoo!, and YouTube are opposed to the bill not because of freedom of speech, but because they profit so much from their infringing practices.

There is no specific proposed date for SOPArmageddon, although most have guessed it would be January 23, the day before The House of Representatives is scheduled to debate SOPA. UPDATE: January 18, both Wikipedia AND Craig’s list blacked out, and Reddit plans to blackout tonight at 8p.m. (Janaury 18, 2012) for 12 hours. Google has not blacked out, but they symbolically blacked out their logo. Contact your Representatives today if you don’t want to live in a world without the internet! Twitter, Facebook, Google (not symbolically) and all the other sites you enjoy could be next (even Starcasm!)

Starcasm.net has yet to be approached by either side, so I imagine we will be open for business as usual if the rest of the internet shuts down. ***Collective groan from our sweatshop of writers***

Yeah, about that 90-day lockdown rehab deal for Lindsay Lohan…