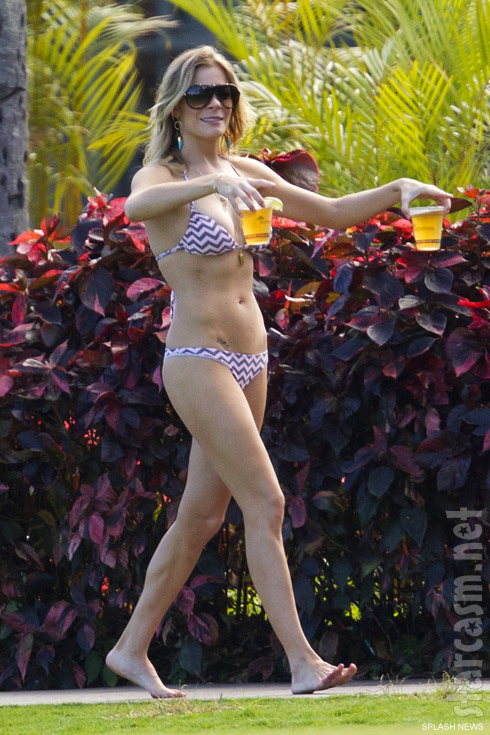 Singer LeAnn Rimes has been putting on quite the bikini fashion show over the last few days as she vacations in Hawaii with hubby Eddie Cibrian. In the latest installment of LeAnn’s “Bikinithon 2012” she is photographed toting a couple frosty brews and playing a rather suggestive game of bocce ball in a series of innuendo-laden shots that could be easily used to teach a Snark 101 class at Blogger University:

Ummmm… It seems quite clear most of the guys found something more interesting to watch than their bocce ball game!

But bending over and playing with balls isn’t the only snark-worthy imagery LeAnn leaves us with today, she also allowed Eddie Cibrian to get himself a big handful (which is about all there is) of LeAnn’s badonkadonk:

UPDATE – We had a number of commenters claiming that they could see the planet between Saturn and Neptune in the pics (in other words, a LeAnnus) so I had to censor the photos. But, if you’re feeling like Galileo and want to go looking for planets you can click on the edited picture below for the original:

Let’s take a closer “cheek peek” shall we?

It’s long overdue, but I’m going to go ahead and crown Eddie Cibrian and LeAnn Rimes the new King and Queen of PDA, removing the crown from the all-but-forgotten previous royal couple of public flirtation, Spencer Pratt and Heidi Montag – who have since been banished from the realm of Give a Damn.

All silliness aside, LeAnn seems to have added a couple pounds to her former frighteningly thin frame and looks great, dontcha think? Here’s a slightly less suggestive photo from yesterday of LeAnn proudly strutting her hot bod:

***Snark 101 students will want to take note that she is walking out of a bathroom barefoot. That will be on the test.