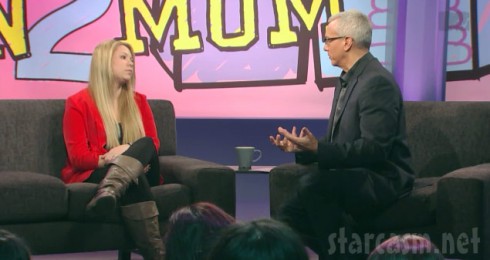 Now that the fourth season of Teen Mom 2 is over, it’s time for all the mothers to rehash the highs and lows in their recent histories. During a preview clip for the upcoming sit-down with Dr. Drew Pinksy, Kailyn Lowry becomes defensive about why she wants to keep Jo Rivera’s new girlfriend out of her and Isaac’s lives.

During the clip, Dr. Drew asks why Kailyn won’t allow Jo’s girlfriend, Vee (real name Vetzabe Torres), to have the same role in Isaac’s life as Kailyn’s husband, Javi Marroquin. Kailyn explains the main issue is that Vee drinks and smokes. She adds there are even pictures of Vee smoking weed with a gas mask circulating around the web, which is no way for a person who is going to be around a child to behave.

Dr. Drew went on to ask — in a very counselor-like way — whether we can give her a chance. But, before he even finishes the sentence, Kailyn cuts him off and says that isn’t going to happen.

Even though the clip only shows a brief segment, the interrogation between Dr. Drew and Kailyn stretched on. As another montage for the Reunion Show reveals, Kailyn eventually becomes so frustrated that she leaves the stage.

In response to the clips, many internet commenters have been saying Kailyn was too defensive. We spoke with one of Kailyn’s close friends who set the record straight about what went down — and how the line of questioning eventually pushed Kailyn over the edge.

According to our source, MTV pressured Kailyn to be extra critical of Vee during the discussion with Dr. Drew. Kailyn was also given the reassurance that Dr. Drew was going to be on her side. Then, when he started go back on his word and say Kailyn had double standards, Kailyn felt as though she was being ganged up on and that made her “feel like s**t.”

Our source adds that Kailyn understands where the negative “hypocrite” claims come from, but she is just trying to protect Isaac from people who drink and smoke. (That may seem like a large group. However, as viewers of the show know, the issues are very near and dear to Kailyn’s heart considering her estranged mother battles substance abuse problems.)

Be sure to tune in to the “Teen Mom 2 Reunion Special with Dr. Drew Monday” night at 10/9c on MTV!