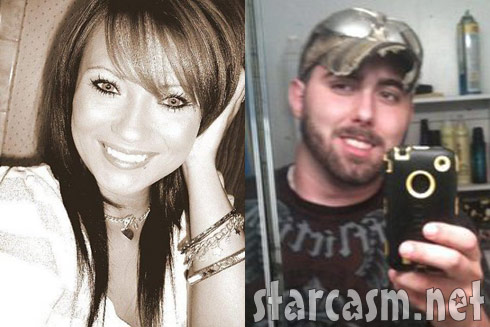 Thanks to their MTV contracts we’re having to get all of our information about the split between Teen Mom 2‘s Leah Messer and Corey Simms second hand, but one of the things that seems consistent from all accounts? Corey doesn’t have any problem with the ladies! (Or perhaps it could be said the opposite way: Corey does have a problem with the ladies.)

UPDATE – We’ve been asked to take the original photos in this post down, so we have complied.

We saw photos from the emotional scene in which Leah Messer read Facebook messages between Corey and a girl named Jordan Humble, and Leah has lamented in the past about Corey’s romantic inclinations. Now, according to a close source, it appears as though Corey may already have a new girlfriend!

Her name is Amber Scaggs and she is originally from Logan, West Virginia before moving to Conroe, Texas. In Texas she had a little baby girl last year but had to break things off with her fiance soon after the birth because the two had a pretty tumultuous relationship. Sound familiar?

UPDATE – CLICK HERE FOR MORE BACKGROUND INFO ON AMBER INCLUDING HOW SHE AND COREY MET!

According to our source Amber flew back home to West Virginia on Easter Sunday and she spent a great deal of time at Corey’s place. The two were spotted around town, including sharing lunch and some PDA at a local restaurant. Amber reportedly stayed around for a week before flying back to Texas the following weekend.

These photos of Corey and Amber are allegedly from his place and feature the two looking quite playful and happy together.

My initial reaction was, aside from his infamously worn camo West Virginia hat, this didn’t really look like Corey. But after seeing his current Facebook photo (right) with the full beard I’m realizing it’s definitely him! He’s just a little more smug and perhaps a little more tan?

I’m all for Leah and Corey moving on and finding healthy relationships if they are unable to work things out between them – which everything seems to indicate is the case – but this seems a bit fast. It was the day after Easter that Leah was photographed moving her things out of the house after a reportedly emotional scene with Corey inside the house. Is it possible Amber was inside? Ugh – I hope not.

As for Leah, it seems that things are looking up for her. As we mentioned in a previous post, in addition to getting a new place of her own, she’s been sharing some goofy photos in which she seems to finally be able to laugh. We wish them both – and their twin daughters – all the best and we hope this break up doesn’t lead to a bitter custody battle or perpetual animosity between the two.

UPDATE: Click here to read our interview with Amber.

UPDATE – The May 30 issue of OK! magazine has a cover story about the Amber Scaggs and Corey Simms relationship with more quotes from Amber and a friend. CLICK HERE to check out the highlights!