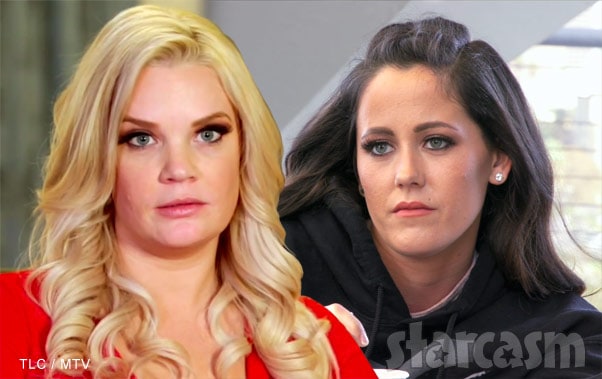 Numerous media outlets are reporting that former Teen Mom 2 star Jenelle Eason was hospitalized on Tuesday due to a lupus flare up. The original source for the story was an E! News article that included specific details, as well as quotes from a source attributing the flare up to stress caused by Jenelle’s recent custody battle.

The only thing is, it wasn’t Jenelle at all. It was 90 Day Fiance: Happily Ever After star Ashley Martson Smith who suffered the lupus flare up. E! News has since changed their story, leaving in the medical details, but deleting the quotes from their “source.” As of the time of this post, there is no indication of a correction being made, and the url of the article still includes Jenelle’s name.

It’s unclear exactly what happened, but Jenelle and Ashley both work with P.R. rep Johnny Donovan.

UPDATE – One of the news outlets left high and dry by E! News was The Blast, who did a post about Jenelle having lupus soon after the initial E! News story was posted. The Blast later did another story about Ashley and explained the mix up. they added the following info:

We investigated the matter and according to sources close to Jenelle, the person who gave the story to E! News explicitly said the story was about Martson. The representative works with both Evans and Martson.
advertisement

We’re told the same person who was involved in the story saw E! News’ incorrect story and immediately called them confused about the mix-up.

UPDATE – E! News has finally acknowledged the error by adding a couple sentences to the bottom of their post: “E! News previously incorrectly reported that Jenelle Evans had been hospitalized for a lupus flare-up instead of Ashley Martson. This story has been updated to reflect the correct information.”

E! News not posting any sort of correction is really odd, but it’s even more odd that they have an actual “source” to back up a story that was mistakenly written about someone else! From the original E! News article:

A source told E! News the reality star had been “quietly dealing” with the lupus diagnosis before the hospitalization. However, the insider said the “extreme stress she has been under with the fight to get the kids back has led to a massive [flare] up of her symptoms.”

“Things have been so intensely stressful for her that it’s made her sick to the point that she had to be rushed to the hospital,” the source said.

As far as we know, Ashley has no issue with the custody of her two daughters and there is no “fight to get the kids back” for her.

The revised article about Ashley does not include any additional quotes from a source. The opening paragraphs are nearly identical, except they have swapped out Jenelle and Ashley’s names, as well as their respective TV shows. Strangely, the original article specifically stated that Jenelle was hospitalized on Tuesday, but the current article about Ashley does not mention the day.

If you are curious about Ashley’s health, assuming the article will not change later to actually be about someone else, here’s the scoop from E! News: “I am dealing with a lupus flare-up and pyelonephritis,” the 90 Day Fiance star told E! News exclusively. “I also have a large cyst on my left ovary the surgeons are coming down to evaluate if they need to remove or not. They have started an IV of Levaquin and have me in morphine and Zofran.”

The news of Ashley’s lupus flare up is just the latest headline confusion surrounding the Happily Ever After star. Radar shared an article titled “90 Day Fiancé’s Ashley Martson Entering Rehab For Depression After Jay Divorce” on Thursday, which included a quote from Ashley herself.

“At this time, I’m focusing on my happiness and my future to better myself,” Ashley told Radar. “I appreciate the support from TLC and the audience of 90 Day Fiancé.”

Soon after the story was published, a post on Ashley’s Instagram story declared the rehab report was “FAKE NEWS!”

Ashley later confirmed that she was getting help, but a few of the previous facts were tweaked a bit — including how much time she would be away. “If you all can stop reporting I’m in rehab that would be great ?,” she wrote in a text graphic posted to her Instagram story. She followed that up with another post that revealed: “It’s a women’s wellness retreat. I’m away for 5 days before cruising with my family.”

It’s unclear if Ashley’s lupus flare up has interfered with her women’s retreat plans.

Ashley has since deactivated her Instagram and she issued the following statement to John Yates on Tuesday:

I can’t do it anymore. I am making myself look stupid stooping to Jay’s level. I loved someone whole heartedly and got burned badly. Having women attack me and support his actions is disgusting. I am trying to move past this and better myself. I clearly don’t have control at this point to not comment or not allow him to get the best of me because I am still very emotional about the situation. I will sign back on after treatment and hopefully will learn coping mechanisms to not lash out towards someone who hurt me so badly. I wish him the best in life and am just going to allow the system handle him. Thank you to everyone who has supported me and sent kind messages -Ashley..