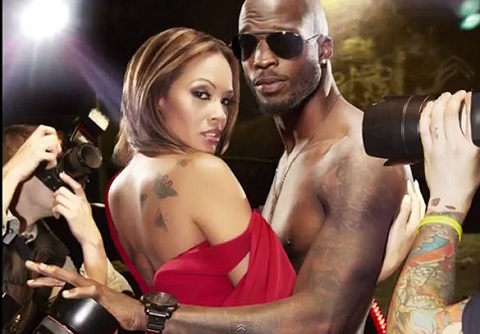 Evelyn Lozada married Chad Ochocinco yesterday in Miami and lucky for us, their 4th of July wedding was all caught on camera for their VH1 show, Ev and Ocho.

Evelyn and Chad had began dating in 2010 around the same time Evelyn was dealing with her nude photos hitting the web. Chad proposed to his reality star girlfriend a 10-carat diamond engagement ring on November 16th of that same year. On February 9, 2012, Chad announced that he would change his name back to Chad Johnson so that Evenlyn wouldn’t have to take on Ochocinco as her married name.

Among the guests at the lavish affair was Chad’s Dancing With The Stars partner Cheryl Burke.

The wedding won’t air for a couple months, but luckily, Chad was tweeting throughout the event, offering fans a sneak peek — and a picture of their wedding bands! 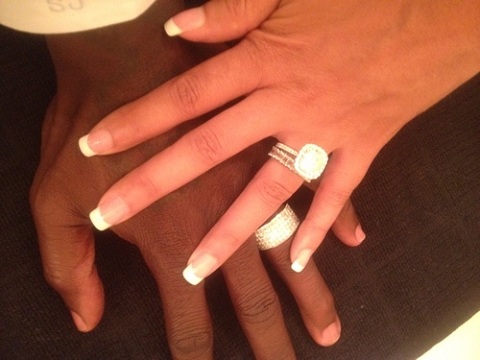 “Live tweeting from my wedding … should be a first I’m assuming, music is playing, can’t see my guests right now but they’re here.”

“I don’t recall sending the butterflies in my stomach an invite … and why am I shaking like I’m in Alaska,” he wrote just before tying the knot. “What if @EvelynLozada is a runaway bride when I get out there and I’m stuck looking good all by myself … did I mention looking good?”

Luckily for Chad, Evelyn didn’t pull a Crystal Harris! Minutes before heading to the altar, Chad tweeted, “Here we go…. Proverbs 18:22… I love you guys… If I do it right the 1st time I won’t have to do it again.”

As expected, the wedding was one heck of party! Early this morning, Chad tweeted, “Small issue, I’m the only person that didn’t/doesn’t drink alcohol n every 1 is wasted including my WIFE, can’t relate 2 this s–t, now what?” He later added, “Okay I’ve been up since my usual 5am wake up time… entire wedding party/guest are still drunk I’m assuming since I’m the only one outside.”

Congratulations to The Johnsons!