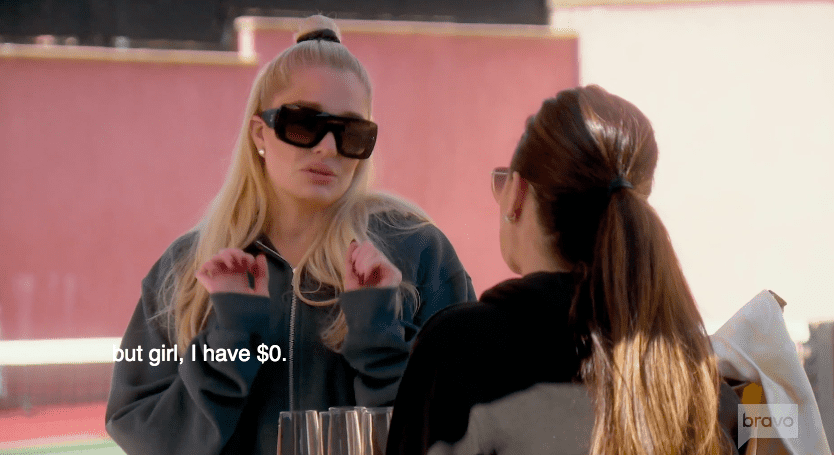 On episode 19 of Season 11 (Over-poured and Over-board) of RHOBH Erika Girardi eatold castmate Kyle Richards that she had “zero dollars.” She is still renting million houses, but her financial situation is precarious right now as she has gone from extreme wealth to living in downgraded luxury and worrying about making rent. Although every word she says on RHOBH is picked apart and scrutinized, her recently revealed salary shows the franchise is a life-raft for her. A New York Times article published October 9, 2021, says Erika’s salary for this season of Real Housewives of Beverly Hills is “likely . . . more than $600,000.”

In August, 2021, Erika was sued for $25 million by the trustee of the Girardi Keese bankruptcy case because her company EJ Global received around that amount from Girardi Keese (her estranged husband’s law firm.) Tom is disbarred, no longer working and living in an assisted facility. His fortune is gone, so his creditors are looking to Erika to settle up lost funds. It’s been uncovered that over the years Girardi Keese spent “$850,000 on hair, makeup and nail stylists; at least $1.3 million on promotion and marketing; and $14 million in American Express charges.”

“I’m out here rebuilding my life, but girl, I have zero dollars,” Erika told Kyle Richards on the September 29 episode. “And by the time those trustees are done with him, there will be nothing. So I walk out of this with nothing.”

“And I said that to my lawyers the other day. I said, ‘I expect nothing,’” Erika said. “And one of my lawyers looked at me and said, ‘That is the most courageous thing I’ve ever heard.’ Every day brings a brand new disaster. It’s just full of f—king bulls—t.”

She’s still living better than most people with obvious glam to film her RHOBH episodes, dining on caviar pies, and vacationing in luxury resorts. She’s also renting a $1.5 million house, and working out with a personal trainer. All of these amenities make her “woe-is-me” attitude a little overkill considering her “rock-bottom” living conditions are still much more priveldiged than most of the population.

How does Erika make money now?

For a while earlier this year, Erika was an ambassador for Savage x Fenty, but they dropped her in July. In the past she has had product collaborations with Zazzle and Too Faced, but she’s currently a liability for brands.

Erika makes money from streams and downloads of her songs on various platforms, but she hasn’t been making new content. Making new music may not be the wisest decision since she’s in a financial bind because she spends more than she makes back to produce it.

Her biggest form of income may well be her salary from Real Housewives of Beverly Hills, which has become more lucrative for her over the past year, and may continue to grow.

“Ms. Girardi is likely earning more than $600,000 from her turn this year on the show,” states the New York Times. “which is still pennies compared to the amount of money she is used to having at her disposal.”

Chrystal Kung-Minnkoff has revealed that Season 12 will begin filming soon, which will kick off a little sooner than last year. US Weekly reports that if Erika returns for Season 12, she will demand an even higher paycheck since her scandal has propelled the show’s rating to huge heights. She’s also sacrificing a lot legally to appear on the show. Anything she says in front of camera, where it airs or not, may be used against her in court.

Bravo was reportedly subpoenaed to share all footage of Erika Girardi, including footage that has not been aired to the public.

Update: In part 1 of the Season 11 reunion Erika confirmed that her Real Housewives of Beverly Hills salary is her main source of income. This, of course, gives her a lot of incentive to continue with the show and less negotiating leverage when it comes to salary.

RHOBH What is Erika Girardi’s clubhouse?