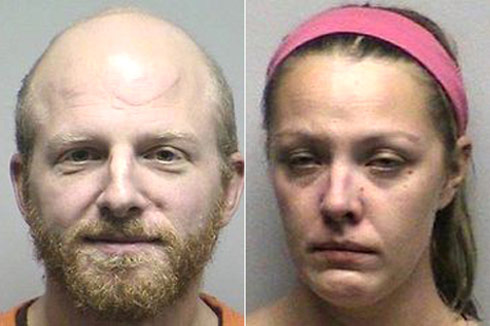 If the back of the cruiser is rockin’ don’t come a knockin’!

A Wisconsin couple didn’t allow a little thing like being in custody in the back seat of a police cruiser (with one of them in handcuffs no less) to stop them from bumping uglies.

33-year-old Travis Husnik and 29-year-old Heather Basten were taken into custody in Oconto County after their vehicle was seen drifting into oncoming traffic. When questioned, Basten (the driver) and Husnik admitted to drinking as the deputy noticed 2 open cans of Busch Light in the floorboard. Husnik “indicated one been belonged to him and the other to Heather,” according to a police report obtained by TSG.

Husnik was on probation at the time and was handcuffed and placed in the backseat of a police cruiser. Basten was driving without a license and she quickly joined her man in the rear of the ride. She was found with a syringe in her purse that she allegedly said she “used to shoot up meth with it.”

While in transport the officer driving the love machine “observed Travis lay onto of Heather in the backseat” and then saw “Heather’s legs go up touching the ceiling and heard her begin to moan loudly.”

The officer stopped the car, got out and opened the rear door only to discover Husnik’s pants and underbritches around his ankles along with Basten’s shorts “hiked up” – allowing the officer to view “both of their privates.”