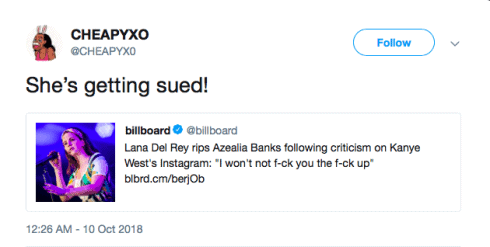 The music world’s bitter battles over politics escalated into Lana Del Rey threatening to physically fight Azaelia Banks. The rapper hit back at the “Video Games” singer by offering to take her to court instead.

It all started last week when Lana Del Rey critically commented on Kanye West’s Instagram post of himself wearing a MAGA hat and sharing extremely controversial options about the 13th Amendment and slavery. (Kanye has since deleted both his Twitter and Instagram accounts.)

“Trump becoming our president was a loss for the country but your support of him is a loss for the culture,” Lana responded to Kanye. “I can only assume you relate to his personality on some level. Delusions of Grandeur, extreme issues of narcissism — none of which would be a talking point if we weren’t speaking about the man leading our country.”

“If you think it’s alright to support someone who believes it’s OK to grab a woman by the p**sy just because he’s famous-then you need an intervention as much as he does — something so many narcissists will never get because there just isn’t enough help for the issue,” Lana continued.

Azaelia Banks responded to Lana’s comments to Kanye on Twitter by calling her out for collaborating with ASAP Rocky last year.

“Wow okay Lana, this would be cute if you were consistent with your outrage and refused to collab with ASAP rocky who has physically assaulted women too,” Azealia wrote. “To me this just looks like the typical White woman taking using a weakened target to ‘pretend’ to be an ally.” ASAP Rocky was charged with a misdemeanor in 2013 for stabbing a female fan.

Azaelia went on to tell Lana she needed to apologize to Kanye for trying to place blame on him for Trump’s indiscretions with women and then accused her of not caring about ASAP Rocky’s actions because his victim wasn’t a white woman.

It took Lana over a week to respond to Azealia, but when she did, she didn’t hold any punches. “U know the addy. Pull up anytime. Say it to my face. But if I were you- I wouldn’t,” the singer wrote yesterday. “I won’t not f**k you the f**k up. Period,” she followed up in a stand-alone subtweet.

“Banks. u coulda been the greatest female rapper alive but u blew it. dont take it out on the only person who had ur back,” Lana continued.

Azealia’s answer was that she planned to sue Lana for physically threatening her online. She also went on a detailed attack on Lana’s appearance.

Let’s talk about arm workouts today!! Example : This is an example of an aging white woman who got work done on her face, and none done on her body (where she needed it most)
Let’s walk her through some upper arm workout! #CHEAPYXOTIPS pic.twitter.com/yVmBALwPu0

Lana fired back with offering to hook Azaelia up with both her plastic surgeon AND her psychiatrist. “I’ll send you my surgeon’s number and a good psychiatrist I know in LA — your psych meds aren’t working #uneedanewcocktail,” Lana responded.

Right now Azealia’s pinned tweet is a screenshot of a text message conversation she had with Kanye West about the Twitter beef. “You never blew it,” he responded to Lana’s accusations that Azealia “blew” being the greatest female rapper. “There’s so much more to do.”