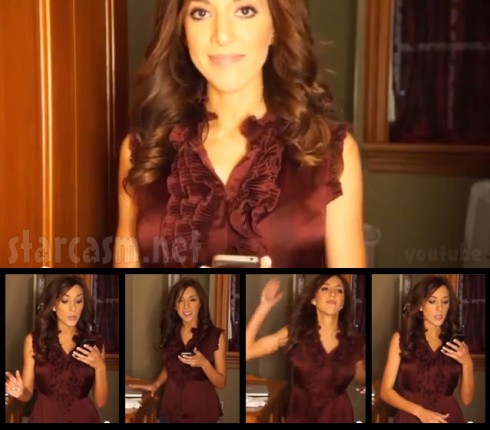 LOL! Farrah says both “sh!t” and “f***” in her first five words! I’m pretty sure that’s not Days of our Lives material. And I realize it’s just an audition, but she should have memorized at least some of the lines. How is anybody supposed to get any idea about her acting abilities when she’s just reading from her phone? (I must confess that I loved her air slap though!!!)

The second audition clip features an acting partner and his dialogue reveals the seemingly autobiographical nature of the script.

* In case you missed it, Farrah Abraham has been accused of hiring herself out as an escort on a website for wealthy men looking for companions.

Here is a transcript of what is said in the scene in case you’re at work and Youtube is blocked or if Farrah’s acting skillz are giving you crippling flashbacks to her performance in Farrah Superstar: Backdoor Teen Mom:

“What were you doing on that site?”

Farrah: “OK, it’s none of your business.”

Farrah: “OK, it’s no big deal. Is it a crime to talk to them, to entertain them, to have some companionship? They have more respect for me than you do.”

Farrah: “Oh OK, well, you’re going to have to start. You waltz in here with a hard 0n, then you disappear. And while you’re gone I have a child to raise, you know bills to pay — tuition, doctor bills.”

“So, rich old men gave you money for sex? Some mother you are!”

“Listen, I know I’ve said it all along, I don’t want to be a part of this, but I gotta draw the line somewhere.”

“This is sick! Twisted! You’re exposing him to this?”

Farrah: “Alright, you don’t know anything. Now get out of here! Go!”

“You know Destiny, I realized you’re nothing but a wh0re.”

Farrah: “Alright, listen to me, and listen to me good. You chose to have no right over my life when you had nothing to do with our baby. So don’t you dare judge me!”

Ummmm… As is often the case, Farrah has left me speechless.

UPDATE – According to Radar Online, Farrah actually got the role as Destiny! A “show insider” tells the site that Farrah initially wanted to audition for a more prominent role, but because of her lack of acting experience she settled for auditioning for the lesser role of Destiny the call girl.

In a rare instance of a soap opera cast and crew being justly condescending, the insider says the choice to cast Farrah has a number of Days of our Lives folks miffed. “Some of the cast and crew is peeved that she’s even on the show because they don’t think a popular daytime show that’s been on the air for 50 years needs to use a ridiculous ploy like Farrah’s name to get viewers.”

If in fact the producers have hired Farrah to play anything but a woman in a coma then I think they are in for quite the challenge! I also think I will be watching that fiasco unfold with a bowl of popcorn and a huge smiling face!