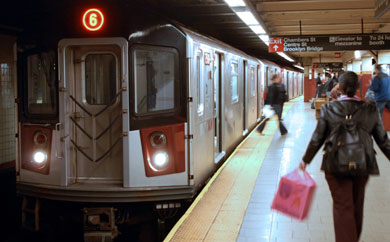 Playwright Peter Mercurio had some first-hand inspiration for his new screenplay Found.

In a piece for the New York Times, Peter recounts a day in August, 2000 when his partner Danny Stewart, a social worker he married last July, called with some startling information. “I found a baby!” he exclaimed “I called 911, but I don’t think they believed me. No one’s coming. I don’t want to leave the baby alone. Get down here and flag down a police car or something.”

The baby was wrapped in a black sweatshirt, and was hidden behind the turnstiles. It was probably a day old with Danny found it. Peter rushed to the station to be with Danny and the child until it was taken by authorities to be put in foster care.

Three months later Danny was called to testify about finding the baby, and their lives changes forever when the judge asked Danny if he wanted to adopt the baby. When Danny said “yes” almost automatically Peter at first got upset, thinking “Are you insane? How could you say yes without consulting me?”

Peter got over this initial shock and fear, and when they went to see the baby at his foster home, Peter fell in love: “with the baby’s eyes staring up at me, and all the innocence and hope he represented, I, like Danny, was completely hooked.”

When they decided to get married last year, 12 years later, they reunited with the judge who asked if they wanted to adopt their son Kevin, at Kevin’s suggestion.

When she finally met Kevin, he gave out his hand, but she asked for a hug instead, and spent a while learning about Kevin’s interests, hobbies, and friends.

When we finally remembered the purpose of the visit, and Danny and I moved into position to exchange vows, I reflected on the improbable circumstances that delivered all of us to this moment. We weren’t supposed to be there, two men, with a son we had never dreamed of by our side, getting married by a woman who changed and enriched our lives more than she would ever know.

Rihanna donates $1.75 Million to Barbados hospital in memory of her Gran Gran Dolly