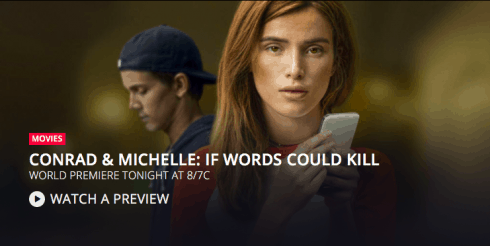 Tonight’s Lifetime movie Conrad & Michelle: If Words Could Kill stars Bella Thorne as Michelle Carter, a teenage girl who encouraged her depressed boyfriend Conrad Roy to take his own life via frighteningly coercive text messages. Last year, Michelle was found guilty of involuntary manslaughter for her involvement in Conrad’s death.

Although the text messages between Michelle and Conrad are disturbing, their case explores the grey areas between the First Amendment to the U.S. Constitution and its guarantee of free speech on the one hand, and the power of our words on the other. And the age of digital communication adds even more layers to the already complicated issue.

After all, it’s sometimes so much easier to say certain things via text message or DM than aloud. Sometimes we think our words don’t really mean anything, but their influence on ourselves and others can be incredible.

In July 2014, 18-year-old Conrad Roy III committed suicide via carbon monoxide poisoning in his truck. Police discovered that the last text messages Conrad received were from 17-year-old Michelle Carter, seemingly encouraging him to take his own life.

Michelle’s lawyers are appealing her conviction. Their argument is that the prosecution “cherry-picked” the text messages they used in the case, and that Michelle had been trying to get Conrad to seek professional help.

Although she frequently did tell Conrad to get help, in many of her text messages Michelle presented Conrad with an either/or situation.

In the days before his death, Michelle and Conrad discussed in detail how he could kill himself in his truck. Michelle even told Conrad his family would “move on” and not get too upset over his death, since they would know he wouldn’t want that.

“They will move on for you because they know that’s what you would have wanted,” she texted. “They know you wouldn’t want them to be sad and depressed and be angry and guilty. They know you want them to live their lives and be happy. So they will for you. You’re right. You need to stop thinking about this and just do it because over turning always kills, over thinking.”

On the day he died, Conrad had second thoughts, and got out of his truck while it was filling up with carbon monoxide gas. In perhaps the most chilling message between the two of them, Michelle urged Conrad to get “back into the truck.” These words are the ones that ultimately led to her conviction: even though she was nowhere near Conrad at the time of his death, Michelle was actively encouraging him to end his life.

“When Miss Carter realizes that Mr. Roy has exited the truck, she instructs him to get back into the truck which she has reason to know is or is becoming a toxic environment inconsistent with human life,” Judge Lawrence Moniz said in his June 2017 ruling explaining why he found Michelle Carter guilty of manslaughter.

A month before his death, Conrad Roy uploaded a heartbreaking video on YouTube describing his social anxiety and depression. “It all started off from just trying to do too much to better myself,” Conrad explains in the video. He describes his efforts to get into TV, games, and current events, simply so he would have things to talk about with people.

“What I’m doing is looking at myself so negatively,” Conrad says. “Look at myself minuscule, little particle on the face of this earth. No good trash. Will never be successful. Never have no life, never have kids, never, never learn.”

Below are some of the text exchanges between Michelle Carter and Conrad Roy III. They start out with Michelle discouraging him from hurting himself, before she begins encouraging it — up to the point of Conrad’s death.

Carter: “But the mental hospital would help you. I know you don’t think it would but I’m telling you, if you give them a chance, they can save your life”
Carter: “Part of me wants you to try something and fail just so you can go get help”
Roy: “It doesn’t help. Trust me”
Carter: “So what are you gonna do then? Keep being all talk and no action and everyday go thru saying how badly you wanna kill yourself? Or are you gonna try to get better?”
Roy: “I can’t get better I already made my decision.”

Carter: “So are you sure you don’t wanna [kill yourself] tonight?”
Roy: “What do you mean am I sure?”
Carter: “Like, are you definitely not doing it tonight?”
Roy: “Idk yet I’ll let you know”
Carter: “Because I’ll stay up with you if you wanna do
it tonight”
Roy: ” Another day wouldn’t hurt”
Carter: “You can’t keep pushing it off, tho, that’s all you keep doing”

Carter: “You’re gonna have to prove me wrong because I just don’t think you really want this. You just keeps pushing it off to another night and say you’ll do it but you never do”
—
Carter: “SEE THAT’S WHAT I MEAN. YOU KEEP PUSHING IT OFF! You just said you were gonna do it tonight and now you’re saying eventually. . . .”
—
Carter: “But I bet you’re gonna be like ‘oh, it didn’t work because I didn’t tape the tube right or something like that’ . . . I bet you’re gonna say an excuse like that”
—
Carter: “Do you have the generator?”
Roy: “not yet lol”
Carter: “WELL WHEN ARE YOU GETTING IT”
—
Carter: “You better not be bull sh*ting me and saying you’re gonna do this and then purposely get caught”
July 11-12, 2014
Overnight and into the next morning, Roy shares concerns over how his parents would handle his suicide.
Roy: “I’m just to sensitive. I want my family to know there was nothing they could do. I am entrapped in my own thoughts”
Roy: “like no I would be happy if they had no guilt about it. because I have a bad feeling tht this is going to create a lot of depression between my parents/sisters”
Roy: “i’m overthinking everything. . f**k. I gotta stop and just do it”
Carter: “I think your parents know you’re in a really bad place. Im not saying they want you to do it, but I honestly feel like they can accept it. They know there’s nothing they can do, they’ve tried helping, everyone’s tried. But there’s a point that comes where there isn’t anything anyone can do to save you, not even yourself, and you’ve hit that point and I think your parents know you’ve hit that point. You said you’re mom saw a suicide thing on your computer and she didn’t say anything. I think she knows it’s on your mind and she’s prepared for it”
Carter: Everyone will be sad for a while, but they will get over it and move on. They won’t be in depression I won’t let that happen. They know how sad you are and they know that you’re doing this to be happy, and I think they will understand and accept it. They’ll always carry u in their hearts”
—-
Roy: “i don’t want anyone hurt in the process though”
Roy: “I meant when they open the door, all the carbon monoxide is gonna come out they can’t see it or smell it. whoever opens the door”
Carter: “They will see the generator and know that you died of CO. . . .”
—-
Roy: “hey can you do me a favor”
Carter: “Yes of course”
Roy: “just be there for my family :)”
Carter: “Conrad, of course I will be there for your family. I will help them as much as I can to get thru this, ill tell them about how amazing their son/brother truly was”
—-
Roy: “Idk I’m freaking out again”
Roy: I’m overthinking”
Carter: “I thought you wanted to do this. The time is right and you’re ready, you just need to do it! You can’t keep living this way. You just need to do it like you did last time and not think about it and just do it babe. You can’t keep doing this every day”
Roy: “I do want to. but like I’m freaking for my family. I guess”
Roy: “idkkk”
Carter: “Conrad. I told you I’ll take care of them. Everyone will take care of them to make sure they won’t be alone and people will help them get thru it. We talked about this, they will be okay and accept it. People who commit suicide don’t think this much and they just do it”

Carter: “So I guess you aren’t gonna do it then, all that for nothing”
Carter: “I’m just confused like you were so ready and determined”
Roy: “I am gonna eventually”
Roy: “I really don’t know what I’m waiting for. . but I have everything lined up”
Carter: “No, you’re not, Conrad. Last night was it. You keep pushing it off and you say you’ll do it but u never do. Its always gonna be that way if u don’t take action”
Carter: “You’re just making it harder on yourself by pushing it off, you just have to do it”
Carter: “Do u wanna do it now?”
Roy: “Is it too late?”
Roy: “Idkk it’s already light outside”
Roy: I’m gonna go back to sleep, love you I’ll text you tomorrow”
Carter: “No? Its probably the best time now because everyone’s sleeping. Just go somewhere in your truck. And no one’s really out right now because it’s an awkward time”
Carter: “If u don’t do it now you’re never gonna do it”
Carter: “And u can say you’ll do it tomorrow but you probably won’t”
—
Carter: “You just need to do it Conrad or I’m gonna get you help”
Carter: “You can’t keep doing this everyday”
Roy: “Okay I’m gonna do it today”
Carter: “Do you promise”
Roy: “I promise babe”
Roy: “I have to now”
Carter: “Like right now?”
Roy: “where do I go? :(”
Carter: “And u can’t break a promise. And just go in a quiet parking lot or something.”

Roy: I’m home.
Carter: Okay.
Roy: Ah.
Carter: What?
Roy: I don’t know. I’m stressing.
Carter: You’re fine. It’s gonna be okay. You just gotta do it, babe. You can’t think about it.
Roy: Okay. Okay. I got this.
Carter: Yes, you do. I believe in you. DId you delete the messages.
Roy: Yes. But you’re going to keep messaging me.
Carter: I will until you turn on the generator.
…
Carter: Are you gonna do it now?
Roy: I just don’t know how to leave them, you know.
Carter: Say you’re gonna go to the store or something
Roy: Like, I want them to know that I love them.
Carter: They know. That’s the one thing they definitely know. You’re over thinking.
Roy: I know I’m over thinking. I’ve been over thinking for a while now.
Carter: I know. You just have to do it like you said. Are you gonna do it now?
Roy: I still haven’t left yet, ha ha
Carter: Why?
Roy: Leaving now.
Carter: Okay. You can do this.
Roy: Okay. I’m almost there.

Conrad Roy reportedly drove to a Kmart and got on the phone with Michelle Carter, and she spoke to him while he died. It was during this phone call that Conrad got out of his truck — and Michelle allegedly told him to get back inside.

Where was Crimson Peak filmed? Is there a real Allerdale Hall?