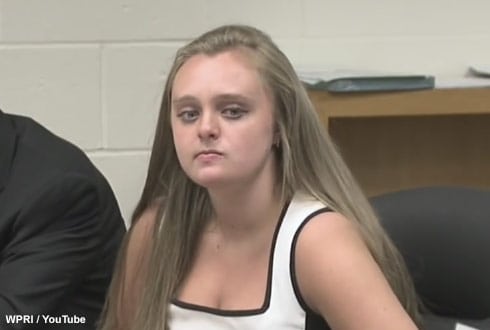 Michelle Carter, a Massachusetts teenager who sent her boyfriend numerous text messages encouraging him to take his own life, will stand trial for involuntary manslaughter.

The Supreme Judicial Court ruled that a grand jury had probable cause to indict Carter, then 17, for the 2014 death of Carter Roy III.

While Carter’s attorney argued that the texts were protected by free speech, the court, in a strongly worded and unanimous ruling, had a different opinion.

“In sum, we conclude that there was probable cause to show that the coercive quality of the defendant’s verbal conduct overwhelmed whatever willpower the eighteen year old victim had to cope with his depression, and that but for the defendant’s admonishments, pressure, and instructions, the victim would not have gotten back into the truck and poisoned himself to death.”

The case has made national headlines due to the content of the communications made by Carter to Roy. In one message she wrote, “I thought you wanted to do this. The time is right and you’re ready, you just need to do it!” In another she added, “You can’t think about it. You just have to do it. You said you were gonna do it. Like I don’t get why you aren’t.”

In addition to the text messages, prosecutors focused on a phone conversation that Carter had while Roy was in the process of attempting to take his own life by inhaling carbon monoxide in his truck. She later texted a friend and said that during a conversation with Roy while he was in the truck, he got out because he was frightened but she told him to “get back in,” according to the AP.

Carter’s attorney, Joseph Cataldo, emphasized that while they were disappointed in the court’s ruling, it was not a determination of guilt, but a judgment that there was enough evidence for her to stand trial.

“At trial, it’s proof beyond a reasonable doubt, which is a much higher standard, and I’m confident that ultimately, after trial, Michelle Carter will be acquitted,” he said.