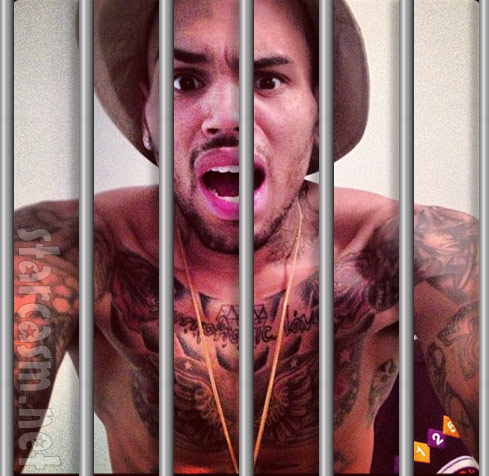 Singer Chris Brown continues his tour of West Coast facilities with his latest appearance being at the LA County Jail. Brown was arrested by Los Angeles County sheriff’s deputies Friday afternoon after reportedly being tossed from his second rehab facility — which was a probation violation. (You might recall he was previously booted from a different rehab facility after reportedly tossing a rock through his mother’s car window.)

Brown’s stint in rehab was mandated by a judge as part of his probation stemming from his 2009 conviction for assaulting then-girlfriend Rihanna, so getting kicked out was a violation, and that is reportedly why he was arrested. As far as the reason for why Chris Brown was tossed out Friday morning, TMZ says that it was for violating “internal rules.” The site adds that they “do not know precisely what Chris did, but we’re told it did not involve violence or drugs.”

In addition, TMZ has sources telling them that Chris “was caught having ‘an inappropriate relationship’ with a female worker at the beginning of the month, but that is NOT why he was thrown out today.”

Chris Brown is currently being held at the Los Angeles County Jail with no bail set. According to online records he is scheduled for a court appearance on Monday, March 17.

In honor of Chris Brown’s reincarceration, I thought I might include a tune from the original pop music gangsta, the Singing Brakeman himself, Jimmie Rodgers:

PHOTOS – Rihanna and Chris Brown spent Thanksgiving together in Berlin

Chris Brown says Jay-Z gets a pass for stabbing someone, compares himself to Trayvon Martin