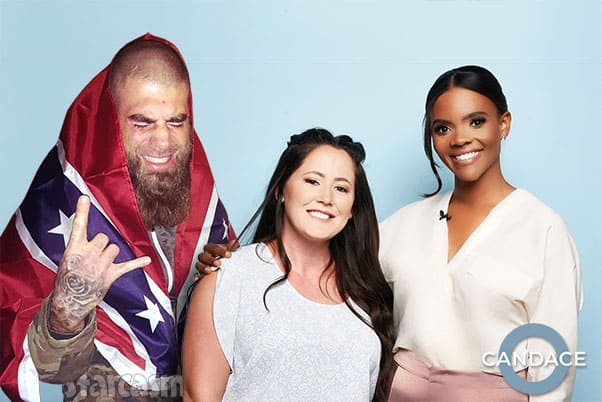 Controversial former Teen Mom 2 star Jenelle Eason is having a hard time finding any businesses willing to partner with her or provide her with a platform to share her opinions and views. Even the Girl Sh*t podcast, which Jenelle reportedly helped put together, cut ties with her on the day of their launch party due to public backlash.

Jenelle has had her own fair share of controversies over the years, including numerous arrests, erratic behavior, controversial statements, drug addiction, and more. But, it’s her husband, David Eason, that is most responsible for her being radioactive in the public eye.

One person who is not afraid of the Easons’ radioactivity is Candace Owens. The conservative author and talk show host invited Jenelle to appear on her new show Candace, which is part of The Daily Wire network. “Join us weekly as Candace delves into the political and cultural issues of the day with her signature blend of intelligence and humor,” The Daily Wire says of the show. “Candace features celebrity interviews and panel discussions with the world’s most influential thought leaders and cultural mavens.”

After recording her interview with Jenelle, but prior to its release online, Candace shared a video talking about her experience meeting the Easons. (Video included below.) She reveals that she used to watch Teen Mom 2 and was quite familiar with Jenelle when it came to her attention that Jenelle wanted to be on her show.

“I said, ‘Great! Book her,'” Candace recalls. “I think it’d be interesting to talk to her about her experiences on MTV.”

Jenelle’s appearance would be the second former cast member from the Teen Mom franchise to appear on Candace in the past two weeks.

“We had Bristol Palin on the week before,” Candace points out. “She didn’t have a good experience on Teen Mom, which she opened up to us about and said that she felt like they were looking for drama. So I was very curious to kind of talk to Jenelle about that. Like, is MTV using teenagers to kind of make millions of dollars? And then, you know obviously, Jenelle notoriously got dropped from Teen Mom because her now husband David Eason shot the dog.”

Candace talks about the experience meeting and interacting with Jenelle and David, and she has nothing but great things to say about both of them.

I’m just going to tell you what my personal opinion is of Jenelle. I was very surprised. She was very likable. She came across as very put together, very kind, very gentle…very self-deprecating in a sense. Like, she was very much, like, ‘I don’t really know much about this or know much about that. I don’t really understand this or understand that. You know, I just — I am who I am. I make TikTok videos.’ She was very kind-hearted is the best way that I would say it.

The fact that Jenelle was able to kick her heroin habit is also something that Candace greatly admires. “It’s very obvious to me that this girl is not on drugs anymore. I think that is so commendable that she got off of heroin. Not many people do that.”

Candance then suggests that Jenelle is much older — or at least more mature — now than she was on the show. “It was just interesting to see the adult and not the child that we were so used to seeing on TV,” Candace points out. (Jenelle was 27 when she stopped filming for Teen Mom 2 two years ago.)

“I think you’re going to see a different side to Jenelle,” Candace says of the interview. She summarizes by saying that she is allowing Jenelle “to answer for all of the things that she was canceled for, and what her husband was canceled for.”

After sharing her glowing review of Jenelle, Candace moves on to David Eason. She begins by admitting she “did not have the best opinion of him going into shooting.” Despite most all of David’s controversial antics happening off screen, Candace puts the blame for her preconceived notions about David on MTV editing.

I think MTV did a really good job of presenting him as just, like, a bad guy, and I could not have had a more different opinion of him when I met him. He, you know, stood up straight, shook my hand, said, ‘You know I’m a big fan, and I’m really happy to be here. And thank you so much for doing this and allowing us to get our story out there.’

He told me when they met he was a welder, and you guys know how much I respect men who work with their hands. He is just, you know, he’s a hard — he’s a worker, you know what I mean? And [he] stepped into this whole MTV world.

Candace moves on and briefly recaps David’s firing from MTV:

He got cancelled from the show, allegedly for saying homophobic comments. What he said — somebody asked asked him about “would he ever let his child hang out with a trans child or a trans, you know, an adult that supports the trans movement,’ something like that. And he said “No, because if you lay down with dogs you get fleas.”

And they made a big deal out of it, and made it seem like he was correlating trans people to dogs. But that’s an expression which means that, like, “hang out with crazy people, do crazy things.” [It’s] up to you if you would allow your child to hang out with, you know, a family of a trans kid or someone that believes you can pick your gender.

Candace on Jenelle and David

“I’m going to give them a thumbs up,” Candace says of the Easons. “I was very pleasantly surprised. I liked Jenelle, and I liked David Eason. I thought he was a stand-up guy.”

After sharing her thoughts on Jenelle and David Eason, Candace moves on to the ongoing conflict between Israel and Palestine. 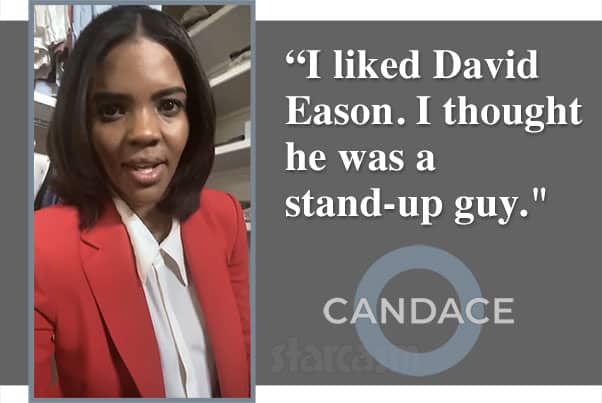 Jenelle and David on Candace Owens

The feelings of admiration between Candace and the Easons were completely mutual. “It was such a pleasure to meet Candace Owens and we are forever thankful of her graciousness!” David wrote on Instagram. “She is such a wonderful person and hopefully the future president of America!”

Jenelle shared a video montage of her time in Nashville on Instagram and captioned it by offering up her praises for Candace:

Here is Candace’s video talking about her experience meeting the Easons and interviewing Jenelle:

For those of you wanting to watch Jenelle Eason’s full interview with Candace Owens, you’ll have to shell out for The Daily Wire’s $12-a-month “Insider” package. We do have a preview clip for you though! Actually, the preview is more than half of the 15-minute interview, so there’s not too much you’re missing out on.

(If you were curious, David does not appear on the show. I also couldn’t find any photos or videos of David and Candace together — either official or casual. No, David didn’t pose with Jenelle and Candace while draped in a Confederate flag. The image at the top of this post was Photoshopped for the story.)