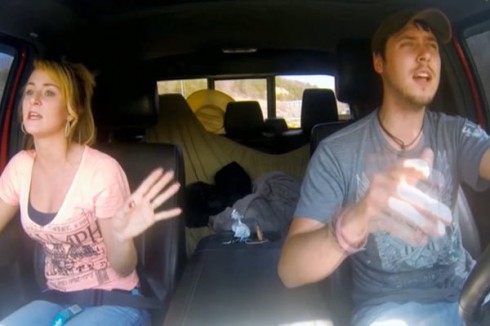 Jeremy Calvert’s claim that Leah Calvert cheated on him ignited a family feud the likes of which West Virginia hasn’t seen since the days of Devil Anse Hatfield and Randolph McCoy.

Leah’s sister, Victoria Messer, was the first to fire direct shots when she accused Jeremy of lying about Leah having an affair to make himself look more sympathetic.

“You wanna sit around and post a bunch of bulls**t but little do you know sweetheart, we are a little smarter than you are and we actually have proof of s**t that you’ve done,” she posted on Friday morning. “So maybe you should think before you start making up lies because we have hidden truth.”

Jeremy’s cousin, Christina Young, then threatened Victoria in the comments section by saying the Messers are “messing with the wrong family.” That prompted Victoria to say the Calverts “have no clue who we are either.” Christina then said she knows enough and accused the Messers of not having morals. Victoria responded that she feels sorry for Christina because the rest of the Calvert family supposedly “talks s**t” about her. 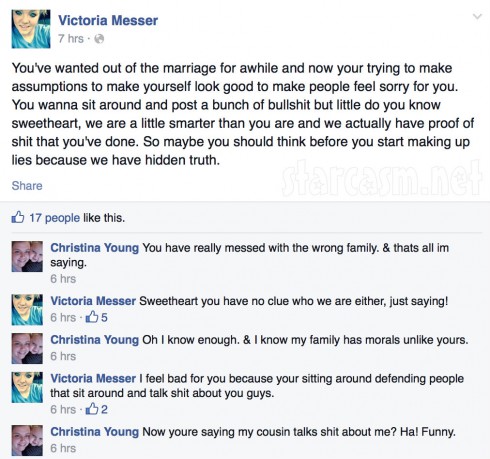 Jeremy and Leah’s moms also got into it on our Facebook page, starting when Dawn Spears defended daughter Leah by saying Jeremy’s dad was the one who made up the cheating story.

Jeremy’s mom, Tammy Calvert, then accused Dawn of covering for Leah even though she knows Leah did cheat with Robbie. She also brought up the fact that Leah’s still involved in a custody battle with ex-husband Corey Simms and threatened them by implying she has grounds to call CPS. (She later deleted the second message.)

Christina also got a word in on our Facebook page by sarcastically telling Dawn she’s “so glad you all are so close with robbie still.” She added, “What a great mother you are!”

One person not involved in the Facebook feud is Leah, who deactivated her official Facebook page after the controversy exploded. Her Twitter page is still up. But, other than telling a fan everything was “ok” earlier this morning, she seems determined to ignore the controversy… Although her one stand-alone tweet from today indicates her mind is elsewhere.

I've never got to a toll booth and not have cash… How did I forget ..

Actually, the more likely case is that Leah and Jeremy were ordered not to discuss the topic by MTV, which is reportedly filming a new season of Teen Mom 2. Unfortunately for the network, the Messer and Calvert family members aren’t bound by the same contracts.