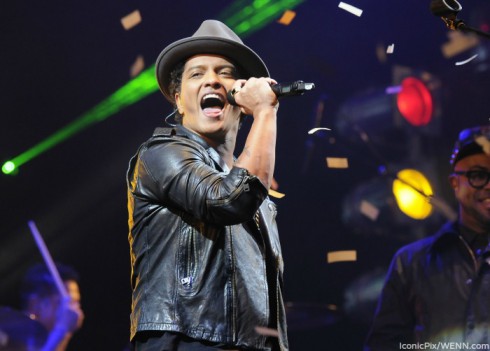 The NFL season is just underway, but plans for the Super Bowl are already coming together. It will be a while before any clear-cut favorites emerge for the title game, but we do know Bruno Mars will take the field during halftime!

Bruno appeared on Fox NFL Live on Sunday to confirm the gig.

“It’s an honor… It’s incredible. We’re celebrating for sure,” the Grammy Award-winner said as he was surrounded by his band, The Hooligans.

Since breaking onto the scene, Bruno has earned five No. 1 singles on the Billboard Hot 100 chart. He was the top-selling digital artist of 2011. Many have even compared Bruno’s dance moves to Michael Jackson’s.

Still, some say it will be difficult to top Beyonce’s Super Bowl act.

“Sorry but Bruno Mars better have fireworks, a full circus act and a special appearance by Tupac to top Beyoncé’s performance from last year,” one person joked on Twitter.

Within the past few years, the Super Bowl Halftime Show has certainly offered variety: We’ve seen Madonna, the Black Eyed Peas, The Who and Bruce Springsteen take the stage. See how Bruno fares during Super Bowl XLVII, which is scheduled for Feb. 2 in New Jersey’s open-air Met Life Stadium.