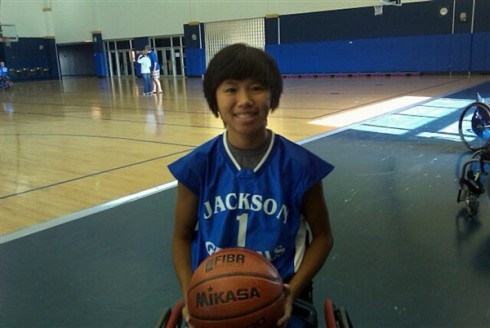 Reuters and NBC News are investigating a disturbing trend: American parents search online for new parents for the children they adopted from other countries. When some parents clash with the new child from another culture they’ve brought to live with them, they put up “advertisements” for the children online for prospective parents to take them off their hands. Often the ads are brutally honest, describing the worst attributes of the children, or saying that they “hate” them. As it turns out, the type of people looking to take in unwanted children in an unvetted process outside the regulated system, usually don’t have the children’s best interests at heart. But as long as the right document is drawn up and signed, it’s legal, and not considered child trafficking because no money is exchanged.

26-year-old Nora Gately, who suffers from polio, was one of those children. Nora was abandoned as a baby in China, and has a leg crippled from polio. At 13 she was about to age out of the adoption system when an American brought her to the U.S. to live with them and their four other children, two of them adopted. Nora says she felt like the “luckiest girl in the world,” but things soon changed, and her relationship with her new parents deteriorated.

When she was 14, she was told she was going on a trip with her dad, which ended in a farmhouse in Trenton, Tennessee to be “re-homed” with Tom and Debra Schmitz. At that time the couple had nine adopted and re-homed children, and they would come to have 17 (18 kids total with one biological child.) Even when he dropped her off, her first adoptive dad told her they’d be bad to pick her up, and she believed him.

Although the Schmitzes frequently got press for caring for a growing brood of children, many with special needs, Nora says they were brutal at home with the kids. “Get out and go dig your own grave,” she says Debra Schmitz told Nora once, and then watched as she dug a giant hole over the course of three hours. “’I don’t care if you die. Nobody will find you. You were not even here in the first place.” Part of Nora’s punishment would often be to take off her leg braces so she couldn’t walk.

Eventually a nurse who would come check on some of the kids at the house sensed something was wrong, and got Nora to spend the night with her so she could record her experiences. The Tennessee Department of Children Services investigated and found one biological child with the couple, eleven legally adopted children, and seven who were not legally in their care.

In 2006 Debra Schmitz was sentenced to six months of jail after pleading no contest to 14 counts of child abuse and one count of trafficking.

Adoptive parents find other parents for their children through internet message boards, mostly on Yahoo and Facebook. After Yahoo was contacted about these groups, they began actively shutting them down. Facebook groups remain up, and a spokeperson explained why: “The Internet is a reflection of society, and people are using it for all kinds of communications and to tackle all sorts of problems, including very complicated issues such as this one.”

In another instance investigated by Reuters an adoptive couple dropped off their 16-year-old daughter from Liberia Quita with a couple who seemed thrilled with the prospect of taking care of the teen even though she was advertised as having been diagnosed with severe health and behavioral problems. No lawyers or officials were involved with Todd and Melissa Puchalla dropping off Quita at her new home with Nicole and Calvin Eason, and the Puchallas failed to dig deeply to find any background information on the Easons. They did have them sign a notarized document declaring the Easons as Quita’s guardians. Although adoption processes can be arduous and difficult, all a parent needs to give guardianship of their child to another adult is a Power of Attorney document. Usually this process is used to transfer guardianship within families or even with friend when a parent cannot adequately care for a child, but this process is happening with adults literally giving their adoptive children away to people they do not know at all.

When Reuters looked into the couple’s background they found that the Easons had their two biological children taken away a few years before because of “severe psychiatric problems and violent tendencies,” and that there were reports that the couple had sexually abused children they babysat.

Read more about this troubling and complicated issue at Reuters.