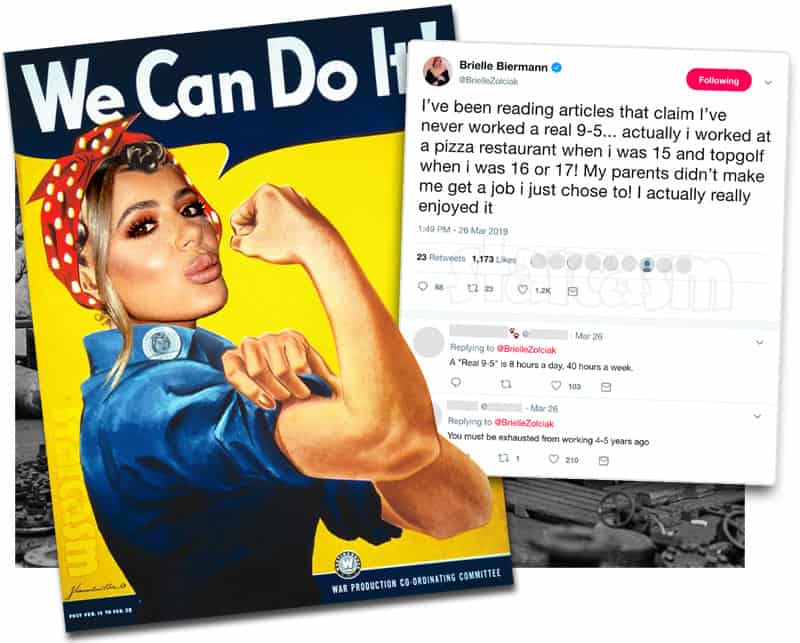 You may think that the only 9-5 experience that Kim Zolciak-Biermann’s 22-year-old daughter Brielle Biermann has is watching TikTok videos featuring the Dolly Parton song, but the reality starlet took to Twitter earlier today to set the record straight!

“I’ve been reading articles that claim I’ve never worked a real 9-5…” Brielle began her tweet. “Actually i worked at a pizza restaurant when i was 15 and topgolf when i was 16 or 17!” she reveals.

Just in case that didn’t impress you enough, Brielle goes on to point out that she didn’t even have to work, but did anyway. “My parents didn’t make me get a job i just chose to! I actually really enjoyed it,” she added.

As you might imagine, Brielle’s boast didn’t seem to win everyone over to the fact that she is a working class initiate. “A ‘Real 9-5’ is 8 hours a day, 40 hours a week,” the top response reads. “You must be exhausted from working 4-5 years ago,” another Twitter user replied sarcastically.

Brielle did have a number of supporters chime in, but most of those were calling the critics jealous and applauding Brielle for not having to work a 9-5.

Meanwhile, moving on to a 9-5 that Brielle is certainly familiar with — i.e. 9-5 lip injections a week… On Sunday, Brielle flaunted her puffy plump pucker in an Instagram video in which she applied some lipstick:

“What’s better than having lips that are way too big?” Brielle asked in the caption. “Having an amazing lipstick to go on em ?” She concluded by tagging @kabcosmetics and adding: “Glazed lip kit!”

“They’re getting bigger!!” wrote one follower in the comments. Brielle responded by revealing it has been quite a while since she had her lips enhanced. “I haven’t gotten them done in a year actually!!”

Another supportive commenter couldn’t help but be a little shocked. “I love her but have never noticed how big they actually are,” she wrote.

Brielle assured her (and us) that it must just be the ‘gram because they don’t look that large in real life. “I asked everyone today if they actually look like that in person and all my friends said no!!” Brielle explained. “So idk how they end up like that in pics.”

What a crazy mystery. ?