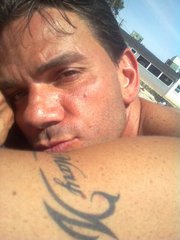 Kim Zolciak’s ex-husband Daniel D. Toce, who is the father of Brielle, is currently serving time in jail for multiple counts of sexual assault on minors.

Toce was imprisoned for charges of sexual assault in Southeastern Connecticut in December of 2010 and was in custody when he was arrested again for another sexual assault incident on a minor that took place in Cromwell, CT in 2009.

He was arrested October, 29th by State Police from the Troop E barracks in Montville and charged with one count each of second-degree sexual assault and risk of injury. Further details were not given because of the age of the victim.

Daniel is currently going through a divorce from his 3rd wife (Kim was his second, and he was allegedly seeing her while he was still married to his first wife, who he also has children with.)

According to Straight From the A, when Kim found out about Daniel being a “child molester” she was understandably devastated, and cut all ties between him and his daughter Brielle. In fact ,this drama may have been filmed for The Real Housewives of Atlanta.