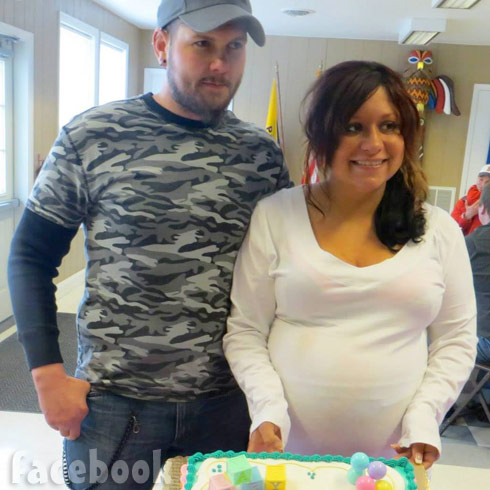 It was revealed back in December that Sabrina was to be a first-time mom with boyfriend Harry Kreiser III, and the little bundle of joy was reportedly delivered Friday, March 22 at 5:06 AM. (You can see Sabrina and Harry at her baby shower in the photo above.)

According to the announcement, made via a Breaking Amish Facebook group page yesterday, Sabrina’s daughter’s name is Oakley Lelia Kreiser and at the time of birth, little Oakley weighed 7.8 lbs and measured 19.5 inches long.

As we previously reported, the full cast of the original Breaking Amish series will be coming back to TLC on Return To Amish, set to premiere some time in June. Rebecca and Sabrina’s pregnancies are sure to be a major focus of the show, as will be Kate Stoltzfus’s continued success with professional modeling. Jeremiah Raber’s storyline looks to be his attempts at selling t-shirts and Amish sweets while (I assume) continuing to be an all-around rather unpleasant sh!t stirrer.

Congratulations to Rebecca and Harry! We will be sure to keep an eye out for the first photos(s) of Oakley!