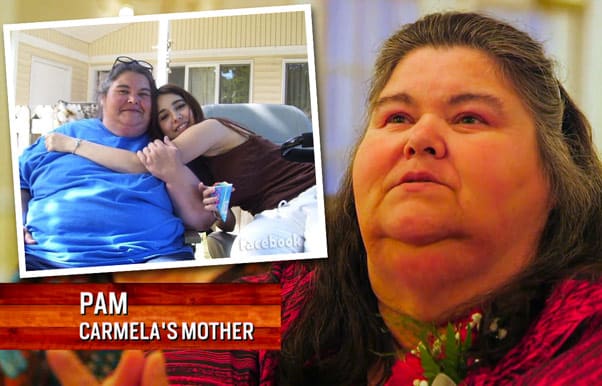 We have some very sad news to report for Breaking Amish and Return To Amish fans as Carmela Raber reveals that her mother passed away on March 29.

“My mom died March 29th, the pain is unbearable, my heart and stomach burns so bad,” Carmela began a Facebook post from March 31. She then shared her frustration over a lack of coronavirus tests, which resulted in her mother never being tested:

I’ve been begging for them to do a covid test. They can’t because there isn’t enough tests and the medical examiner said that they basically test people that are healthy that come down with symptoms.

If you have preexisting condition they don’t test you and treat the illnesses/ symptoms the best they can. Reason being is there isn’t enough tests available.

What can we do to get more testing kits sent to my county or state?? Who do we contact? (Washington state)

Carmela described the horrific experience of having a loved one who was very sick and isolated from those who cared about her. Plus, the pandemic meant that the medical staff was overtaxed and it was difficult for the family to get updates.

Imagine having the love of your life and they’re in the hospital and you can’t see them, they won’t let you, they won’t call you, because they’re so busy with the sick.

Having your mom beg you to see her because she’s scared, and nothing u can do, nothing..

My mom died all alone, scared, no advocate to help her understand no one to make sure she’s given the right medication.

Remember your love one before you decide to just go outside and be around a lot of people.. we need to get rid of this and if we have to stay in our home then we need to.. it may not kill you, it could kill your loved one within days.

I will never get over this.

The pain is so bad. My mom was alone for 3 weeks. She was so scared. She died all by herself. I can’t get over this god this pain won’t go away. I don’t know if I’ll be able to survive this.

This covid sh*it is bullsh*t.

Carmela’s husband Jeremiah Raber shared a photo of Carmela and her mom on Instagram and announced the sad news to his followers: “R.I.P to my mother in law. She passed away March 29th 2020.”

Jeremiah also talked about the frustration in regards to Carmela’s mom not getting tested for COVID-19 in a YouTube video posted back on March 17:

As some of you know, my mother-in-law is in the hospital, and the last few days we could not get in touch with anybody — and I mean nobody — as far as to see what was going on. The hospital was not responding, the hospital was not answering phone calls. They wouldn’t give us any information. They did not tell us that they had moved her to the ICU. They would not keep us updated.

Finally, Carmela decided to go to the hospital, and they told her that she had to leave or they were gonna escort her off. They wouldn’t give her any information, other than saying: “Oh, she’s okay. She’s okay.

So finally, yesterday, towards last night, we got in touch with the hospital and we had a long conversation with the one nurse.

…Three, four days ago, people were telling us — people from the hospital were saying: “Oh yes, she got tested for the coronavirus and came back negative.” And then some of the other nurses were saying: “No, she never got tested, blah, blah,” you know? Different family members were being told different things.

So if they have no tests, then why is the local news media saying that people are being tested in the hospital — in that exact hospital — when one of the nurses straight up said there are no tests there?

#ReturnToAmish Find out all about the cult that Jeremiah's wife Carmela Raber was raised in: https://t.co/laWR9X7kEd pic.twitter.com/Y47jOqo4Ry

It is still unknown if Carmela’s mother had the coronavirus, but hopefully her situation has changed Jeremiah’s mind about the pandemic. On March 13, he streamed a live video with some friends in which he insisted that the media was over-blowing the seriousness of the coronavirus outbreak as he compared it to the regular flu repeatedly.

“I don’t think it is what they’re making it out to be, that’s my opinion,” Jeremiah said. “You can say: ‘Oh, well people are dying from this.’ Well, look at the people that are dying from the flu.” He then added that “it’s all a scheme for a few different things.”

Jeremiah’s stance sounds very similar to President Trump’s at the time, and Jeremiah referenced Trump specifically just a couple minutes later. “Trump got exposed to it now, right? He shook hands with somebody who actually has the coronavirus, and do you know what he said? He’s not gonna do anything about it. Why is he not doing anything about it? Because he knows it’s not as bad as they’re making it out to be, that’s my opinion.”

“It’s a scheme for money,” Jeremiah continued later. “It’s also a way to take control of everything.”

Jeremiah insisted that people needed to get educated. “Instead of just listening to the news, they need to do the actual research,” he said.

#ReturnToAmish Jeremiah Raber is now an ordained minister, so you can finally have that #BreakingAmish themed wedding you always wanted! https://t.co/ELhY2R7vv5

There may be more in the video from Jeremiah and his pals about the coronavirus “scheme,” but the video is more than three hours long and there’s no way I was going to spend any additional time trying to uncover additional misinformation.

Getting back to Carmela, our thoughts are with her and her family. The passing of a loved one is always difficult, and it sounded like the situation with her mother was nothing short of traumatizing. Unfortunately, I think we will be hearing lots of very similar stories over the next few weeks, and maybe months

Please, stay home if you can. And if you have to go out because you are an essential worker, be careful — and know that you have the admiration and gratitude of millions like myself.