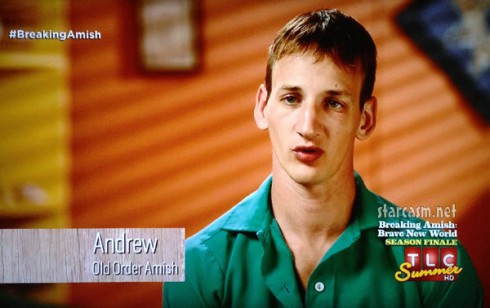 Tonight’s episode of Breaking Amish had an appearance of Abe’s brother Andy (full name Andrew Schmucker), who showed up to express his disapproval of his sister Katie Ann going English. He had just got out of prison for writing a bad check, and wanted to confront his family with some problems he has with Rebecca.

“Me and Rebecca haven’t seen eye-to-eye for a while,” Andrew says. “She interfered way too much with my family. When I found out mom and Katie Ann were down in Florida, I was worried and surprised, and I had to go down and check up on them.”

When Andrew shows up to visit Abe and Rebecca, she calls his presence a “spit in the face to me.” Andrew confronts Abe about their mother Mary and sister Katie Ann breaking from the Amish, but Abe says that Andrew really doesn’t care about that. “He just came here to be a d!ck.”

“Things started going bad about a year ago with my family,” says Andrew. “That’s when they got in with Rebecca and sh!t started falling apart.” But Andrew got together with Rebecca before that! He says, “about three years ago Rebecca moved back to Pennsylvania, we started hanging out and we got to drinking and one thing led to another and we slept together,” Andrew reveals.

The admission has many wondering if perhaps Andrew is the father of Rebecca’s daughter — which would not only explain the animosity between the three, but also Abe’s unwillingness to answer questions about whether or not he is the father. The same question arose last November when a photo of Andrew holding a baby surfaced on Facebook that included Andrew stating the baby was Abe’s, although one commenter pointed out that it looked like him. Here’s the photo (which was already edited when it was posted): 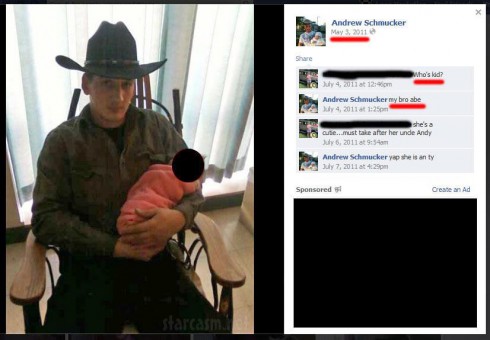 Those rumors were fueled further when Rebecca’s ex husband Rufus Hostetler wrote a post assuring everyone he was not the father of the baby by explaining, “Well I never heard of a baby take over 12 months to be born do the math. That’s when the baby was born aprox. 12 months after she left so pretty sure it’s not mine,” before adding, “She [Rebecca] also slept with Andy Abe’s bro. So could his to lol no lie.”

Rebecca got pregnant in late 2010, which is “about three years ago,” so it is possible. Perhaps Jerry Springer should host the reunion special and do a paternity test!

Breaking Amish Jeremiah Raber reveals he was a cutter, says cutting himself was his way of crying