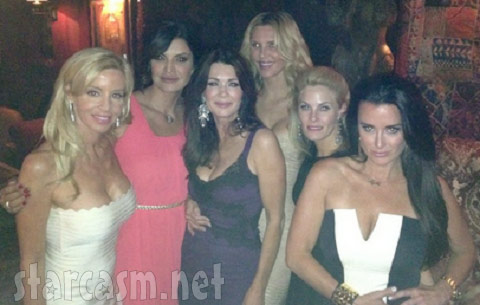 Noticeably absent from the trip were Kim Richards, Adrienne Maloof, and Taylor Armstrong – who are all believed to be official housewives of season 3. As we previously reported, Kim’s absence was probably likely to her recent sobriety and wanting to avoid the temptations usually associated with the BH ladies’ fun-filled Vegas weekends. But, the potential drama may have also played a factor.

“Kim said no because of Brandi, she’s intimidated by her. It all stems from what happened between them last season,” an insider told Wetpaint. “Kim still isn’t comfortable around her Also, Kim’s sobriety is still pretty new. Vegas probably wouldn’t have been the best idea for her, anyway.” Kim and Brandi didn’t get along during season 2 and engaged in more than one shouting match throughout the season. Fans surely remember their tiff at Dana Wilkey’s game night — and their brawl at Kyle’s white party.

Adrienne ended season 2 in a feud with former bestie and neighbor, Lisa Vanderpump, and Taylor has been reportedly struggling with a drinking problem.

“Adrienne didn’t go because she had other commitments already scheduled,” the insider also said. However, as many know, Adrienne is on the outs with her former friend Lisa Vanderpump and has even been accused of selling stories about Brandi Glanville to the tabloids, which she denies. Plus, the group was staying in an exclusive penthouse at the Four Seasons Hotel, and Adrienne would never agree to stay anywhere else besides the Maloof-owned hotel The Palms.

Regarding Taylor Armstrong’s absence, the insider reveals that she was busy shooting a PSA and could not attend. One might think that the absence had more to do with the recent rumors that have surfaced regarding her excessive drinking. Although Taylor denies the claims, and her co-star Kyle Richards says she doesn’t know where the rumors are coming from, Taylor may not want to add fuel to the fire. Oh, and Taylor is also dealing with the fallout from a recent court battle.

It seems Dana Wilkey and her $25,000 sunglasses were left out of the loop entirely!