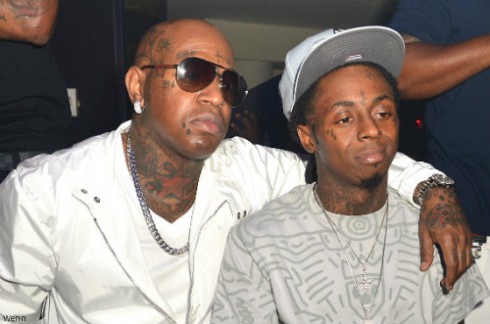 Who needs enemies when you’ve got friends like these? Police in Georgia have indicted rappers Young Thug and Birdman for allegedly conspiring to kill Lil Wayne (pictured at top with Birdman) because of a contract dispute.

According to the indictment, first obtained by Atlanta’s WSB-TV, the potentially fatal disagreement started boiling over in January: Lil Wayne filed a $50 million federal lawsuit against Cash Money Records, which is co-owned by Birdman (real name: Bryan Williams). As a result of the dispute, investigators suggested Birdman and Young Thug got friend Jimmy Winfrey and several Bloods members to exact revenge.

The indictment goes on to say that police saw Wifrey driving a white Camaro and “observed that Winfrey had an assault rifle in his vehicle” near Lil Wayne’s Atlanta concert on April 26. After the show, police gave Lil Wayne and his crew an escort to the city line.

“After Atlanta Police discontinued their escort, (Winfrey) and fellow Blood Gang members entered Interstate 285 from Atlanta Road in Cobb County in pursuit of the buses occupied by (Lil Wayne’s) group,” the indictment reads. “(That’s when) the white sports car (allegedly driven by Winfrey) pulled beside the buses…shots were then fired into the buses from the sports car with a .40 caliber handgun and a 9mm handgun.”

Winfrey was allegedly on the phone with Young Thug while chasing down Lil Wayne’s buses and called Birdman after the shooting. Although multiple charges against Winfrey were outlined in the indictment, Young Thug and Birdman have not been charged in the case. However, Young Thug was arrested on Wednesday morning for an unrelated outstanding warrant that stemmed from a terroristic threat he allegedly made at a mall.