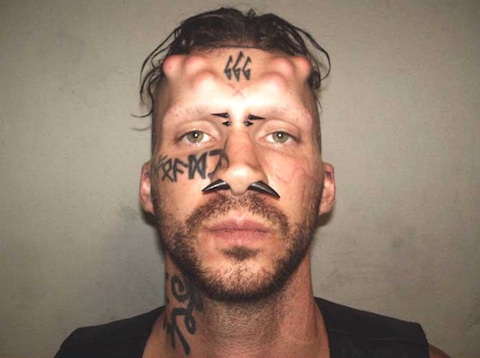 It took a Massachusetts jury six days to convict Caius Veiovis, 34, for his role in murdering three people in 2011.

Perhaps they were put off by his dashing good looks.

Veiovis, who has a series of horn implants on either side of his forehead, a “666” tattoo on the middle of his forehead, metal spikes pierced through his nostrils and nasal bridge, and a series of runes tattooed on his neck, shouted “I’ll see you all in f•••••• hell” at the jury and courtroom in general after his conviction.

He and two accomplices are being jailed for kidnapping and murdering David Glasser, a man who had been set to testify against a member of the Hell’s Angels motorcycle club.

The other two murders were the elimination of witnesses to the first murder.

He changed his name from Roy Gutfinski in 2008, while serving a seven-year prison sentence for an assault, with a razor, on a teenager, followed by licking the victim’s blood with his (Gutfinski’s) girlfriend, and then making out. Like you do.

Massachusetts law dictates a minimum sentence of life imprisonment, without parole opportunities, for those convicted of first-degree murder.

VIDEO Woman walks out of store with flat-screen TV under her skirt, isn’t caught

The strange case of North Port High School: 3 students died after getting hypnotized by the principal