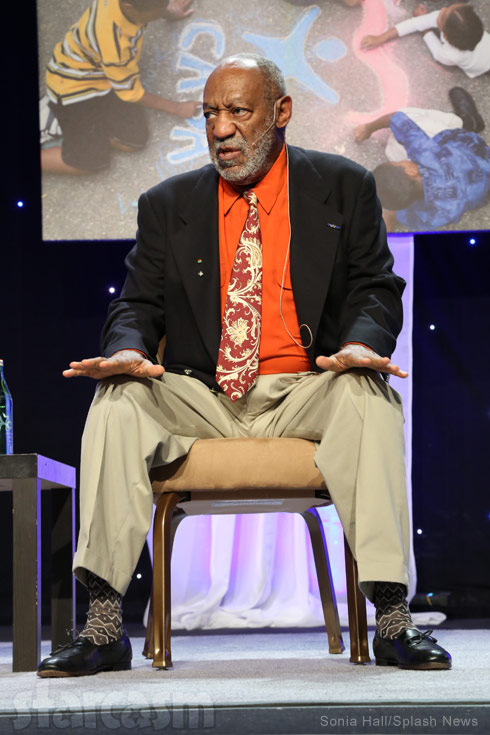 Bill Cosby has remained silent over the last few weeks after his history of alleged sexual abuse made headlines courtesy of a string of events sparked by fellow comedian Hannibal Buress calling Cosby a “rapist” during a performance in Philadelphia. Most recently, Cosby silently shook his head when asked about the allegations in a “Weekend Edition” interview on NPR earlier this week. Soon after it was revealed that the comedian’s scheduled appearance on the Late Show with David Letterman on Wednesday had been canceled. Now he, or his lawyer at least, has finally issued a statement.

“Over the last several weeks, decade-old, discredited allegations against Mr. Cosby have resurfaced,” says John P. Schmitt, lawyer for Bill Cosby. “The fact that they are being repeated does not make them true. Mr. Cosby does not intend to dignify these allegations with any comment.”

Schmitt then goes on to show appreciation to those showing support for Bill Cosby. “He would like to thank all his fans for the outpouring of support and assure them that, at age 77, he is doing his best work.” He concluded by stating, “There will be no further statement from Mr. Cosby or any of his representatives.”

In case you missed it, following the headline-grabbing jokes by Hannibal Buress (which Buress says he had been using in his set off and on for six months prior to the Philadelphia show), the Bill Cosby social media team challenged fans to use a Cosby meme generator, and it backfired royally with results like these:

Barbra Bowman, who alleges she was drugged and raped by Bill Cosby 1985 when she was only 17, published an article in The Washington Post titled “Bill Cosby raped me. Why did it take 30 years for people to believe my story?” The article had the subtitle, “Only when a male comedian called Cosby a rapist did the accusation take hold,” and began with this rather startling paragraph:

In 2004, when Andrea Constand filed a lawsuit against Bill Cosby for sexual assault, her lawyers asked me to testify. Cosby had drugged and raped me, too, I told them. The lawyers said I could testify anonymously as a Jane Doe, but I ardently rejected that idea. My name is not Jane Doe. My name is Barbara Bowman, and I wanted to tell my story in court. In the end, I didn’t have the opportunity to do that, because Cosby settled the suit for an undisclosed amount of money.

While I am grateful for the new attention to Cosby’s crimes, I must ask my own questions: Why wasn’t I believed? Why didn’t I get the same reaction of shock and revulsion when I originally reported it? Why was I, a victim of sexual assault, further wronged by victim blaming when I came forward? The women victimized by Bill Cosby have been talking about his crimes for more than a decade. Why didn’t our stories go viral?

Here’s a video clip with Bowman:

As of the time of this post, Netflix is still planning to make the “Bill Cosby 77” special available later this month.