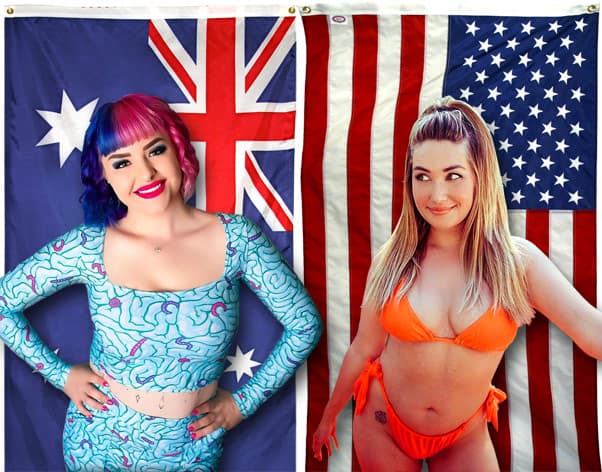 The highly anticipated 90 Day Fiance: Before the 90 Days Couples Tell All premieres tonight, and to promote the two-night event, Australian star Erika Owens spoke with Entertainment Tonight about her roller coaster relationship and eventual breakup with her bisexual partner Stephanie Matto. Erika essentially iterated some of the criticism she shared about Stephanie during the season, and also responded to viewers expressing their doubts on social media about Stephanie being bisexual. Stephanie saw what Erika had to say, and she responded on Instagram. at looooooong length.

We will start with Erika’s interview and her reaction to those who openly question whether or not Stephanie is bisexual. “Honestly, I can only speak for my experience and who I am,” Erika says. “Sexuality is a very personal thing, and sometimes it takes exploring yourself to be able to figure that out, you know? It sucks that at some points, it felt like the figuring out of things was at my expense, but I’m not gonna sit here and say that she is something or she isn’t, because that’s her own personal journey.”

And what about the comments and criticism online? “I don’t think it’s fair for them to say that in the first place to a stranger and secondly, you know, to even make a judgment in the first place,” Erika says. “Of course, like, people can have their doubts or whatever, but like I’ve mentioned before, this is Steph’s journey and its no one’s place to, like, publicly go for her.”

Erika is asked about her time with Stephanie, and she expresses her frustration over Stephanie being upset and jealous about certain aspects of her life that she was well aware of ahead of time. Erika says that if she had known that these aspects would be a “deal breaker” in their relationship, she would have told her not to make the trip to Australia.

Stephanie’s jealousy issues in regards to Erika’s friends and her past relationships are also addressed as Erika calls them “absolutely not” justified.

In addition to the jealousy issues with Erika’s friends, there was also Erika’s previous bisexual relationship that would eventually be the straw that broke the relationship’s back when revealed. Erika was in a serious relationship with another woman who refused to come out to her parents. That would eventually result in the couple splitting up. (Erika didn’t come out to her parents until dating Stephanie, so the narrative is a little confusing.) Stephanie wasn’t aware of the previous relationship, and the combination of Erika keeping it a secret as well as feeling that Erika’s reveal was meant to pressure her into coming out to her mother, would result in Stephanie storming out of the hotel room and murdering an innocent little bread bowl in the process.

Erika tells Entertainment Tonight that the hotel break up had a huge impact on her. From her interview:

“Once we shut the cameras off, I was not in a good place for a while after that,” she reveals of their dramatic split. “After the bowl throw, I actually sat in bed for quite some time and I was just crying. It was not good mentally for me. I wouldn’t say I was fearing for my life or anything, but you know, it was a very intense moment that really startled me and kind of put me in a very negative head space that was not great. … For a couple of weeks after that I was not OK.”

Erika adds something that I think A LOT of Before the 90 Days fans would agree with quite passionately. “Steph and I both probably could have realized that we just weren’t compatible early on and we just keep beating a dead horse that wasn’t working.” She adds that the beating of the dead horse is probably why they can’t get along now. “If we would have ended earlier, we probably would still have been friends.” 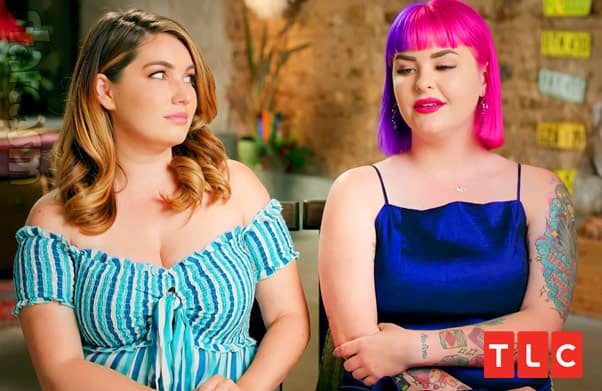 Stephanie saw what Erika had to say in her interview, and she offered up her response in a series of lengthy Instagram text posts. In addition to defending some of her actions on screen, Stephanie spilled some behind-the-scenes tea, and even accused Erika of discussing Stephanie’s sexuality with at least one other cast member. She also says that Erika and her ex “were asked to submit an audition tape for a possible spin off.”

I also want to highlight the very last sentence in which Stephanie says the “people I had issue with jealousy-wise weren’t even discussed on the show because it wasn’t allowed.” Hmmmmmmm.

I will just step out of the way and yield the podium to Ms. Matto. (The rest of this post is Stephanie’s full response.)

In reference to Erika’s E interview.

1. No, we didn’t spend a lot of alone time in the hotel room because after our first few initial dates, things had spiraled so badly. She was giving me the cold shoulder, silent treatment. I felt awkward, she felt awkward. She stormed off on me the first night in Port Augusta when I suggested I sleep on the couch because she had been quiet and abrupt with me all day. Then came the night of the party, and again, she pretty much left me on my own.

2. In my eyes, Erika was much more concerned with befriending the crew and being a social butterfly than actually trying to get to know me. To the point that the producer would actually encourage her to ask me questions. The girl knows nothing about me and never even made an attempt. In fact when I would try to reveal my baggage and past, she would react poorly like “oh you never told me this”. As if in the short time we were seriously speaking I would even have the chance to tell her everything. It felt very unfair.

3. The moment on the park bench with my medication was obviously staged. But her reaction was shocking to me, and another thing that just clearly showed me she isn’t the one.

4. I had insecurities and jealousy issues but after the party I should have left. There were several times Erika left me alone, while she had a band of people she could turn to. She is playing the victim and acting as if I was confused and figuring myself out as if that is a bad thing to do. We had only been exclusive for a month prior to me coming. I wanted to figure things out, figure out if I could truly trust her because I knew of her lifestyle but also knew what a great girl she was. My confusion was never about “figuring” out my sexuality but more so figuring out if what we had was true love and if I could realistically trust her in a long distance relationship

#90DayFiance #BeforeThe90Days @StepankaMatto insists her bisexual coming out story line on the show is real. She also addresses her 2016 YouTube video titled "I Was in Love With a Girl | My First Bisexual Experience" & explains why her mom never saw it. https://t.co/V7aZuUqLwS

5. Weeks after me returning to the states we began to talk again. this is when she informed me she and her ex were asked to submit an audition tape for a possible spin off. Which is cool and idc BUT You DONT do that type of sh*t if you really cared for someone or loved them and you sure as hell don’t tell them.

6. Erika acts like she was so alone but she always had the crew (whom she bonded with) and her friends. My last night in Australia she went out dancing with a girl and the camera guy while I stayed alone in the hotel.

7. Lastly, Erika went to one cast member that I know of (though I suspect there are more) and discussed with them MY sexuality and personal things from our relationship. In her interview she acts as if it [is] no one’s place to discuss someone’s sexuality yet it [is what] she did.

This will be my last time discussing the matter. There is PLENTY more I have bit my tongue on because personally this whole team Erika, team Stephanie bullsh*t is dumb. We both lost. We both ended up hurt. We were both VERY different people with different lifestyles, communication styles, and love languages.

#DidYouKnow #BeforeThe90Days' @StepankaMatto was a stripper in LA named Kitty!? 🙀 (Yes, she kept that a secret from her mom too.) Find out all about Stephanie's brief stripping career, including how she chose the name Kitty. #90DayFiance #MagicSteph |💃🏼 https://t.co/EaCN3fZlRQ pic.twitter.com/5unxeSGYLQ

I knew about a week or so into the trip that this was not working. I even sat with production and Erika to discuss my feelings about how I felt this was going to end badly if I stayed. And I was basically told to keep going, and that love is a risk blah blah blah. No. I should have left. But of course you do tend to feel bad leaving when there are people relying on you for a show and filming. Erika took time off from work, and I felt bad.

I chose to stay and make the most of the rest of the trip and I did feel myself letting my walls down. We had a nice trip and went cage diving. We began to spend the nights together again… but of course, things turned bad again quickly. I should have left initially when I had that meet up with production. I felt isolated, left out, and like I was not being listened to. Those are all things that can be overcome but so much harder when you are in a foreign country and filming all day 6 days a week, constantly talking about your problems.

Prior to #BeforeThe90Days, @StepankaMatto was a Top 5 finalist in @Nickelodeon's "R U All That" talent search & a plaintiff on #JudgeKaren's court show. Get details, including clips of Stephanie from the "Granny Panties" ep of #SupremeJustice! #90DayFiance https://t.co/c3uJIajyR7 pic.twitter.com/yoBo1qfQyI

I NEVER want to speak on any of this ever again. I am done with this person and have been fora VERY long time. Reliving this show has been exhausting. I just want to move on, but unfortunately so many people have messaged me about this interview, and after watching it, I said “no more”. No more of this one sided narrative. I deserve to speak my truth.

I told Erika about my intimacy issues, my celibacy BEFORE coming. I had hoped for more understanding, but even when I told her a million times over that it’s not her, it’s me, and that I think she is the most BEAUTIFUL woman I had ever been with, she still found a way to turn it around and make it an attack on her. I even told her the jealousy issues were MY problem to sort through. I NEVER wanted to come between her and her friends, I simply wanted clarity. Yes, I went about it the wrong way, but it’s a show, they wanted dramatic scenes. The people I had issue with jealousy-wise weren’t even discussed on the show because it wasn’t allowed.

BEFORE THE 90 DAYS What is Stephanie’s life threatening illness? Is her relationship with Erika real?