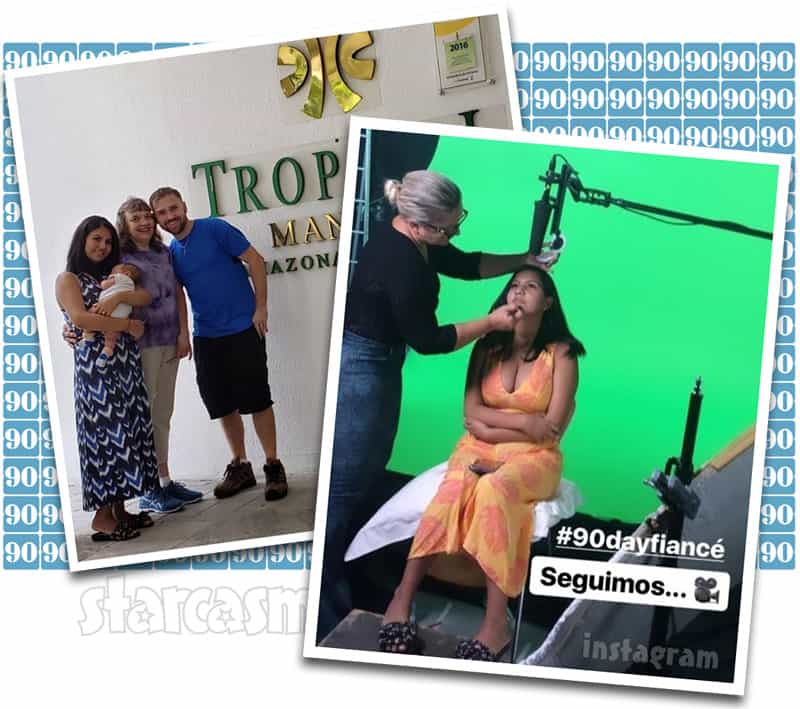 It seems Before the 90 Days star Paul Staehle’s mom Mary Edna got tired of waiting for him and wife Karine to come to the United States with their newborn son Pierre, so she flew to Brazil to meet her daughter-in-law and grandson for the first time!

Paul shared a photo and video of her mom arriving in Manaus, Brazil on Friday. However, Paul didn’t offer up too much information, so it’s unclear how long his mother plans to stay, or if she plans on making the long trip up the river to visit Karine’s family in their home village of Tonantins. If so, that would certainly make for some great television!

Above is the photo, which features Paul, Karine, Mary Edna, and Pierre together at the Tropical Hotel in Manaus. Here is a brief video clip of Mary Edna getting off of the plane, with a little help from the folks at American Airlines:

Speaking of making great television, Paul and Karine continue to film with TLC. Camera crews have been following them since before Karine gave birth, and another photo surfaced today featuring Karine post-birth preparing for an interview session in front of a green screen. (Photo included above.)

It’s clear that Paul and Karine will not be on the current seasons of 90 Day Fiance: Happily Ever After or TLC’s What Now? web series. Paul previously stated that they will also not be returning to Before the 90 Days — which makes sense given that they are already married and not going through the K-1 visa process. That only leaves one real possibility: TLC’s new spin-off 90 Day Fiance: The Other Way.

In case you missed it, TLC announced the new series way back in July of last year. It will document Americans willing to move to another country for love. Paul and Karine agreeing to be on that show would certainly explain why they are still in Brazil, especially after Karine reportedly received her visa and is cleared to come to the United States.

It was announced during Discovery Inc.’s upfront presentation in April that The Other Way will premiere in June, so I assume we will be seeing the first preview trailer VERY soon — perhaps even during Sunday night’s episode of Happily Ever After. I know I cannot wait! Not only will we likely get to catch up with Paul and Karine, including being able to meet little Pierre and see Paul’s mom recreating his fish out of water experience in Brazil, but we will also get to meet lots of new couples. And instead of seeing Americans spending a week to a month abroad, we will be seeing them preparing to live there permanently! (I assume they were able to find cast members in some unique countries.)

Getting back to Paul’s mom, I’m sure her presence will make a world of difference for Paul. It seems that all of his time in Brazil — which has been A LOT of time — has been spent in relative isolation due to the language barrier and Paul’s awkwardness. I can’t imagine how great it will be for him to have someone so familiar around! Of course, that might not be the case for Karine. As any fan of 90 Day Fiance (or liver of life) is well aware, relationships with the mother-in-law can be a bit dicey to say the least.

I will wrap up this post with lots of photos of baby Pierre, courtesy of Paul and Karine:

And just like that… Then there was 3…..Photography by @otapacheco