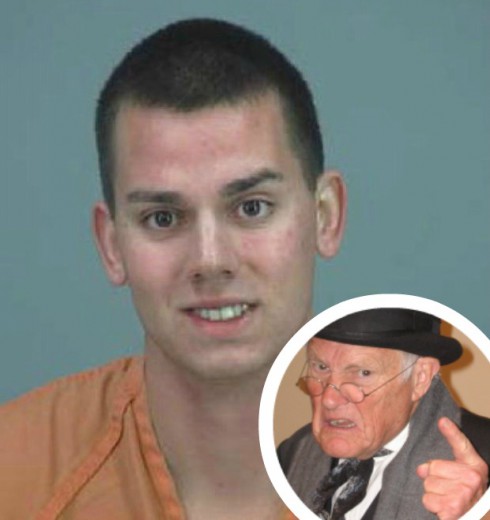 When a 68-year-old Arizona man found his 63-year-old wife in bed with a man 40 years younger than either of them, the frustrated husband did something pretty unexpected: He poked him with his cane to wake him up and then asked the young lothario to leave. Only when the feisty 20-something lunged at the homeowner did the threatened 68-year-old fire off a warning shot with his pistol, stricking the boy-toy in the hand with a single pellet.

When the youngun’ still refused to leave, the 68-year-old called the police.

“Things are going on here! My wife is leaving with this guy,” said the man, who reportedly suffers from Parkinson’s.

Later in the tape, the 911 operator tried to get a description of the younger guy.

“What color shirt was he wearing?”

“He wasn’t wearing a shirt at all,” the older man said.

“Was he wearing pants?” he’s then asked.

The authorities eventually apprehended and identified the 22-year-old as Stephen Trevor Chapman, a recently released convict. Even though the wife permitted him to enter the home, Chapman was charged with one count of disorderly conduct.

“This was an unusual call for our deputies in an active senior community,” Sheriff Paul Babeu said in a release. “Clearly, this young man should have heeded the warnings of the homeowner to leave his residence and to stop sleeping with his wife. The young man is lucky that he only got poked with a cane and hit with a stray pellet from the shotgun.”

Randy Travis will not spend forever and ever in jail, amen