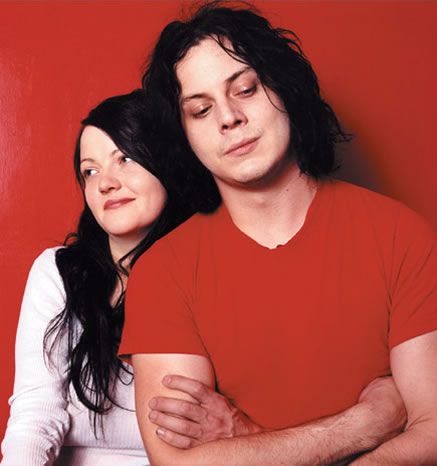 Just as his current wife, flame-haired model Karen Elson, is taking her own stab at music Jack White may be reuniting with his ex-wife Meg White.

The pair haven’t been together as the musical duo The White Stripes since 2007, when they had to stop performing because of Meg’s anxiety. Jack White recently told Contact Music that Meg’s anxiety is now gone, so they should be good to go to continue making music, though they haven’t officially planned anything. Just as simple as that.

The White Stripes are a curious thing, an American myth so perfectly packaged it’s hard to believe they’re real:

Detroit, mid-nineties: A shy, voluptuous, bartender with childlike brooding looks meets a young upholsterer who’s into the blues and looks like an immaculate offspring from Tim Burton’s imagination. She bangs on drums with virgin hands and makes a primitive sound like a toddler’s first emotional outbursts to the world, and he adds his experimental guitar work and strange bluesy, rock-n-roll screaming vocals.

When they marry in 1996, he takes her name (his real name? John Anthony Gillis), suspiciously since their band name, The White Stripes, relies on it. (Later when he marries another girl, he will also give his children Meg’s last name.) They release a few albums that begin to take off and refer to each other as siblings in interviews. In 2001 they get a secret divorce near the height of their success, and its not until several years later that marriage and divorce records surface, putting an end to their clever myth. The mysterious duo never publicly fess up and continue to make music and wear white and red clothes while they write music about the strained tensions between a woman and a man.

Jack remarries and has babies. In 2007, The White Stripes have to cancel a tour because Meg White suffers from severe anxiety. In the meantime Jack has started numerous other projects, including The Raconteurs and The Dead Weather, which just released it’s second album, but nothing has quite compared to the chart-topping and concert-rocking event that was The White Stripes. They reunited for a fumbling few minutes in 2009 to see Conan O’Brien off his Late Night show into a doomed attempt at hosting Johnny Carson’s legacy “The Tonight Show.”

It’s hard to put your finger on exactly what it is about the Stripes, but it isn’t just the raw talent, it’s the terrifying energy between them.The music sticks in your heart and feels like a jealous, tormented, yet unconditional love. It’s crazy, infectious music from divorced people who continued to spend years performing intimate tours, night after night, proclaiming to be brother and sister. She banging her drum, and he screaming and falling to his knees, caught up in some kind of incestuous rapture:

The verdict? There should be more White Stripes. Bring it on more of your crazy.