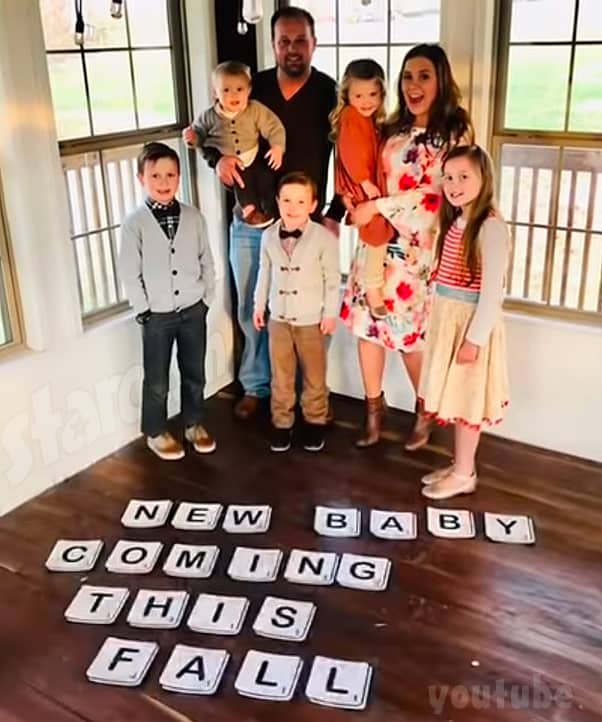 Josh Duggar and Anna Duggar are going to be parents again! The couple shared the announcement that Anna Duggar is pregnant with their sixth child by posting two Instagram videos in which their children (eventually) spell out the message: “NEW BABY COMING THIS FALL.”

“We are so excited to announce that we are expecting a new little one!” Anna captioned the clips. “As we watch our children grow and thrive — we look forward to baby six joining us this fall!” The six-time mom-to-be added the hash tag #littleduggars.

Anna and Josh shared a joint statement on the family’s website about the pregnancy. “We couldn’t be happier to share with the world that our family is growing by one this Fall,” they wrote. “We continually stand amazed by God’s love, redemption, grace, and blessings in our lives. Our entire little family is ecstatic!”

Speaking of their entire family, Jim Bob Duggar and Michelle Duggar also shared their thoughts on the announcement that they will sooon have another grandchild:

We are so happy for Josh & Anna, expecting their 6th child and our 16th grandchild! Each child is a blessing from God! Anna is one of the most amazing women in the world, she is a Proverbs 31 woman! Anna & Josh are good parents and it is going to be neat to see what God does with each one of their children’s lives. Mackenzie, Michael, Marcus, Meredith and Mason are so excited to have a little sibling on the way! God is at work in their sweet little family! He has blessed them with another child! What a gift! The best days for their family are still ahead!

Although the announcement was made public today, it appears as though the video is at least a month old. It was uploaded as an unlisted video on YouTube back on March 26:

The new addition(s) will be joining older siblings Mackynzie, 9, Michael, 7, Marcus, 5, Meredith, 3, and 19-month-old Mason. The couple’s sixth child comes after more than ten years of marriage, some of which have been difficult, to say the least. Despite their difficult times, Anna reflected on the ten-year anniversary of their engagement without any regret. “The past 10 years have been a wonderful adventure,” she wrote in July of 2018.

The pregnancy news comes just a few months after rumors swirled late last year that perhaps Anna had actually given birth to a sixth child in secret.

The announcement also comes right after it was revealed that the couple is selling their Arkansas home, which was listed for $299,000 last month before the price was dropped to $289,000 four weeks later. Perhaps five bedrooms, three bathrooms, and 2,985 square feet is a bit tight for a family of eight?

Anna being with child means that there are currently three Duggars who are pregnant. Anna’s sister-in-laws Jessa Seewald and Kendra Duggar are both currently expecting.