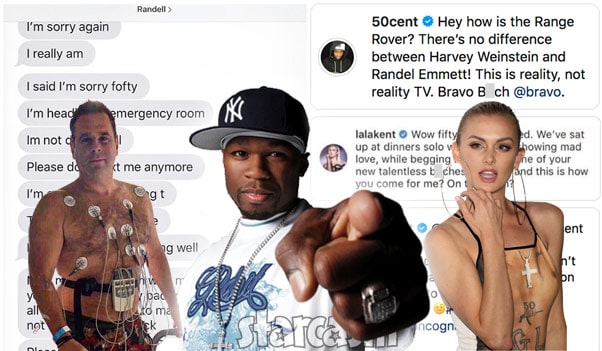 This weekend features three of the most epic showdowns in entertainment history! The Avengers are currently crushing box office records taking out revenge on The Mad Titan Thanos, everyone in Westeros (except Cersei) is preparing to battle the Ice King at Winterfell in what will reportedly be the longest battle scene in film or television history, and Vanderpump Rules star Lala Kent is clashing with 50 Cent — with DISASTEROUS results!

If you’re on social media then you’ve probably seen references to the Lala and “Fofty” feud this weekend, which started with 50 Cent commenting on an old episode of Pump Rules. The feud would quickly escalate and eventually result in Lala’s financier Randall Emmet heading to the hospital with a potential heart attack (seriously) because 50 Cent was demanding that Emmett pay him back $1,000,000 that he owes by Monday.

There was A LOT of back and forth with this feud, which included some deleted posts as well as Instagram live clips, so it’s a little difficult to get all caught up if you missed even a few hours. So, I will attempt to recap the Lala Kent, 50 Cent, and Randall Emmett feud for you, complete with video and text messages.

THE BEGINNING OF THE FEUD

The whole thing started with 50 Cent being all of us — watching reality show reruns at 2:30 in the morning. He shared a scene from an episode of Vanderpump Rules in which Lala Kent recounts the first time she met her future fiance, movie producer Randall Emmett. “Rand saw me and sent his assistant up to ask me if I was an actress,” Lala recalled to a co-star while at a hair salon. “I told him to go to my Instagram account.”

Lala continued: “The next day — I get a phone call that says you have an audition.” She later revealed that she went out with Randall and some friends and “I let him hit it the first night, and we were inseparable. He would just send me, like, really expensive gifts. The first night we banged, I got a car the next day. He was like, ‘Do you want a Range Rover?’ I was like, ‘Yeah.'”

Lala went on to describe how she and Randall like to role play with Lala being an aspiring actress willing to have sex to get a part, and Randall playing the part of a movie producer willing to give parts for sex. In other words, they kind of recreate their first date with Lala wearing wigs and using different names.

50 Cent shared the clip on Instagram along with his commentary:

10 seconds left in the 4 quarter hoe’s are Winning. Do you want A range rover, ?yes, bitch yassss. Then just run out ?‍♀️?and suck a dick. LOL smh?‍♂️#lecheminduroi #bransoncognac

In the comments section of the post, 50 Cent added the following:

ME TOO ROLE PLAY: Are you a actress ? come to my hotel and act like you really want the role, then suck a d*ck ?? No good Randall No good ?‍♂️

Lala replied claiming that 50 Cent’s post and comments were a betrayal given what her fiance has done for him in the past:

Wow Fifty. I’m disgusted. We’ve sat up at dinners solo with you, you showing mad love, while begging Rand to put one of your new talentless b*tches in a film, and this is how you come for me? On the gram?

50 Cent shook his damn head and replied: “Look at this sh*t ? little b*tch think she in a movie. I don’t beg for nothing hoe.”

Lala then called 50 Cent’s sexuality into question as she laughed at him for watching Bravo and for beefing on Instagram:

She swears she’s a thug from south side Jamaica queens & she’s up in here watching Bravo ? Someone has forgotten where they come from ? Coming for me on the gram!? I smell fish coming from fifty’s direction. Vanderpump Rules airs Monday’s at 9/8c, only by @bravotv. I got the strap ? 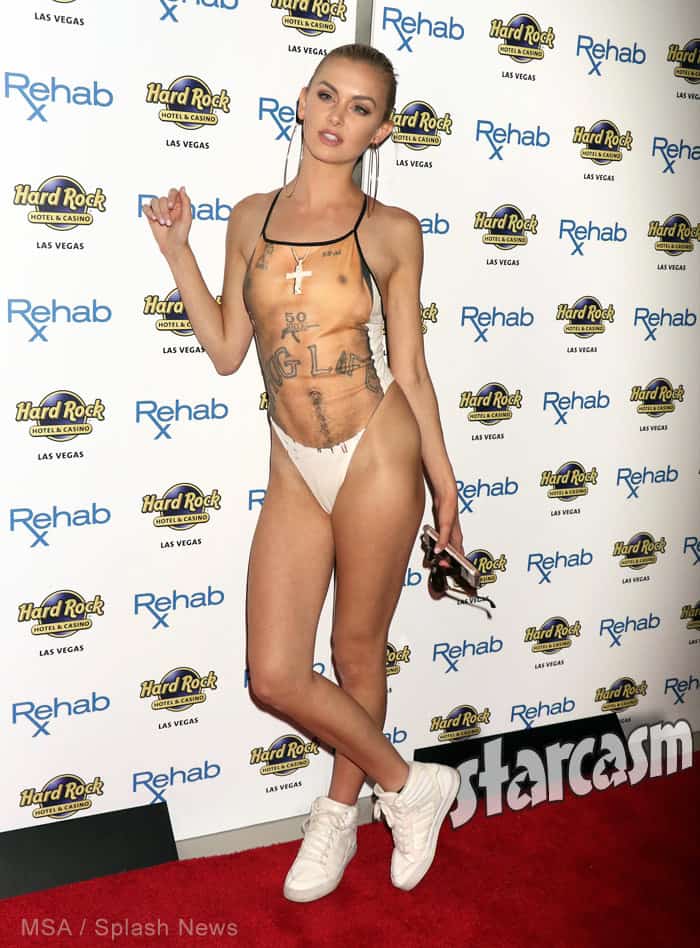 LALA BRINGS THE ME TOO MOVEMENT INTO IT

After posting (and deleting) her comments, Lala set herself up for a huge fall by getting WAY up on her very short high horse in an Instagram live video in which she condemned 50 Cent for using Lala and Randall’s role playing to “diminish the validity of the Me Too movement.”

50 Cent decided to post a clip of me on the show Vanderpump Rules talking to a cast member, who’s my friend, about what I do to keep my relationship spicy. When I saw this, not only was I disgusted, but I was in shock, because my fiance has been there for Fifty in really dark times. But the other thing was that Fifty took a clip of me talking about what I do behind closed doors with my fiance and used it to diminish the validity of the Me Too movement. That I will not stand for. If you have been affected by a man like Fifty, do not be quiet! We’re not going to be silenced. I have your back, and we need to let these f**kers know that they are not safe, because once they think they’ve silenced us, we are all f**ked.

50 Cent posted a clip from Lala’s live stream on Instagram. “Hey how is the Range Rover?” he asked in the caption. “There’s no difference between Harvey Weinstein and Randel Emmett! This is reality, not reality TV. Bravo b*tch @bravo.”

This post isn’t about my take on the feud, but it’s hard not to comment here. Lala told this story to her friend while recording for a reality TV show in front of a TV crew at a hair salon. Plus, a large part of Lala and Randall’s role playing is meeting in a public place like a hotel bar. Acting like 50 Cent was using some sort of “behind closed doors” personal info is ridiculous.

Lala literally states that they role play a casting couch scenario, and all 50 Cent did was call her out on it. If Lala admitted on national TV that she and Randall role play with her in black face and wearing chains, 50 Cent would most certainly call them out on that too! And would Lala claim he was “diminishing the Black Lives Matter movement” by doing so? And remember, Randall is AN ACTUAL HOLLYWOOD PRODUCER! His producer credits from the last few years include major projects starring names like Arnold Schwartzenegger, Faye Dunaway, Bruce Willis, Bella Thorne, and Sylvester Stallone.

Ah, but Randall’s professional reputation wasn’t all that would take a hit from his fiancée’s feud with Fifty — his bank account would as well. After Lala deleted her posts, she reportedly approached Us Weekly to attempt to sell her side of the feud. 50 Cent caught wind, and he posted a series of screen caps of his alleged text message conversations with Lala’s fiance Randall in which Randall apologizes to “fofty” repeatedly.

Fofty is having NONE of it as he claims that he has loaned Randall a million dollars over the past six years, and he wants all of it back by Monday! That demand, combined with his professional career being in jeopardy courtesy of the very public feud, supposedly landed Randall in the hospital with a potential heart attack.

Here are the text messages as well as Fofty’s unsympathetic captions:

Fifty then shared a series of taunting posts on Instagram demanding that Randall pay him back the rest of the money he owes:

?look at this fool taking selfies, you better get me my money fool. #lecheminduroi #bransoncognac

?see You should have gave me my money. ?what the fuck is really going on LOL #lecheminduroi #bransoncognac

Your not gonna die before Monday @randallemmettfilms go ahead knock your self out. LOL

On Saturday, Randall Emmett seemed to indicate he was doing just fine medically as he posted a couple images on Instagram. One was a photo of his house in the Hills (I assume) with the word “home” added. Another was a photo of his two kids, which Randall captioned: “Thankful.”

Speaking of Randall’s two kids, their mother (Randall’s ex-wife, actress Ambyr Childers) chimed in on the Lala and Fofty feud on Instagram. A commenter asked Ambyr if she had seen Fifty’s comments, and Ambyr replied by commenting (and deleting): “Yes! @50Cent said it best. HOE’S WINNING….I guess if that’s what you call it. Randy got what he wanted.”

OK, I think that should get you all caught up. Now we can all take a quick break and prepare for the Battle of Winterfell! Or 90 Day Fiance: Happily Ever After. Or both! Of course, we will keep an eye on the feud and keep you updated if there are any major developments.

If you are wondering what in the world Lala Kent is wearing in the photos we’ve used in this post, the answer to that is a Tupac Shakur swimsuit. She wore the outfit to a Rehab Beach Club Spring Break bash in 2016, which was a couple years before Lala revealed that “when Tupac died he took over my body.”

UPDATE – THE FEUD IS OVER! RANDALL PAID FIFTY ONE MILLION DOLLARS! Click the link for the latest!