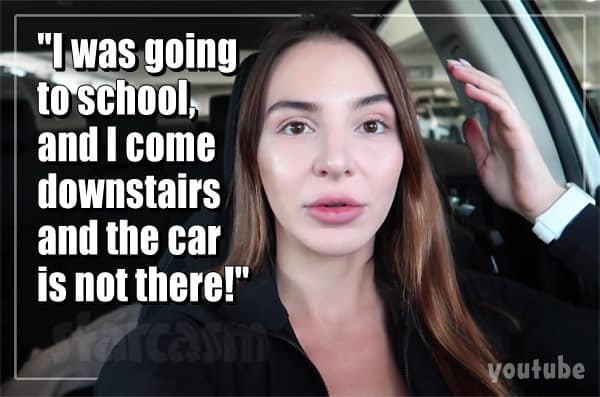 90 Day Fiance star Anfisa Nava continues to live her life without husband Jorge Nava as he serves his two-and-a-half-year sentence for felony Attempted Transportation of Marijuana for Sale in an Arizona prison. But, it seems that Jorge’s bad decisions continue to impact her life dramatically as she reveals in a new YouTube video that he stopped making car payments months before his sentencing. As a result, she returned from class the other day to find the car had been repossessed!

“After Jorge went to prison, I was driving his car, but obviously he wasn’t making payments,” Anfisa says in the 10-plus-minute clip. “Actually, it’s not only because he got in trouble, but he was just — he hasn’t been making payments since, I believe, June.” Due to Jorge’s lack of payments, Anfisa says that his car got repossessed two weeks ago.

“I was going to school, and I come downstairs and the car is not there!” she recalls. The sudden lack of transportation wasn’t a complete surprise for Anfisa, however, because she was prepared to a small degree. “I knew that it was going to get repossessed sooner or later, and I really didn’t keep anything in the car. So, it wasn’t really that much of a problem.” She says that the only frustrating fallout was having to get a new parking sticker for her college and that the remote for the gate of her apartment complex was in the car when it was repossessed. Oh, and the $60 she had to spend using Uber the rest of the day.

Since living the daily Uber life was obviously not an option, Anfisa elected to get a new car. After hitting up some people she trusted for advice, she decided to get a 2018 Honda Civic, but after testing the base model, she elected to go with the slightly upgraded Civic. She says she was able to make a large down payment and she was really excited to talk the salesman down to 3% interest on the purchase. Later she gets just a tad emotional as she says how much she loves her first car.

Later in the video, Anfisa talks a bit about school and reveals that she is currently taking four classes: Spanish, Accounting, Math, and Biology. She says that she is on track to finish up at the community college she is currently attending in 2020, and she plans to transfer to a four-year university after that.

Anfisa reveals that she still receives criticism, including people trying to blame her for Jorge’s legal problems and incarceration. I totally don’t get it, and neither does Anfisa. “Jorge is an adult,” she says, “and he really should take responsibility for his actions. And whatever is going on with him now, he brought on himself.”

Due in part to the negativity that she is receiving, Anfisa says that she is unsure if she will be posting any more videos talking about Jorge — how he is doing, their relationship, etc.

So what kinds of videos will she be making? Anfisa says her next video will be all about the plastic surgery procedures she has had. After that, she is not sure and asks her viewers to share any suggestions for what they would like to see.

Personally, I’d like to see more fashion videos — Anfisa revealing clothes that she recently purchased, sharing her thoughts on them, and then modeling the looks. I’m a fan of her style, and also a fan of her talking about her style. But, that’s just me! What would you like to see Anfisa make videos about? Be sure to let her know — she is really great about responding to fans (who aren’t jerks)! Actually, she’s great about responding to the jerks as well, but not in a pleasant way.

Here is the full update video:

90 DAY FIANCE Cassia Tavares on divorcing Jason Hitch: ‘He has destroyed everything I felt for him’