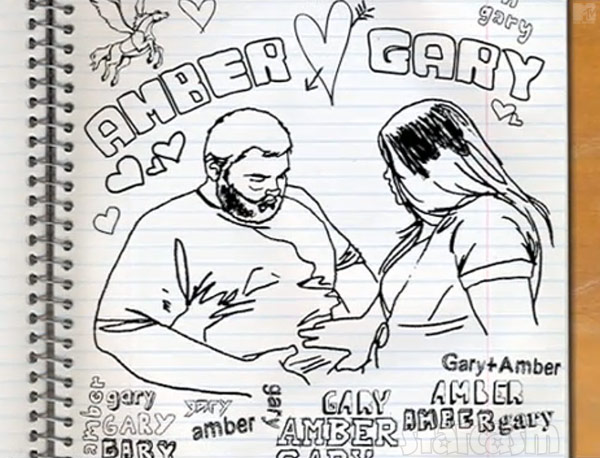 This afternoon MTV premiered all four of their “Getting To Know” specials featuring the stars of Teen Mom OG watching footage of their 16 and Pregnant episodes as well as their four seasons of Teen Mom and the subsequent catch-up episodes and “Being…” specials. Actually, not all of the moms were willing to relive all of their MTV lives as Amber Portwood refused to watch her years on Teen Mom, saying she was high the whole time and “it wasn’t happy moments of my life at all.”

Amber did sit through scenes from her 16 and Pregnant episode (you can see a clip of that segment here), but balked when producers said that they would also be playing highlights from Teen Mom. “I can’t watch Teen Mom,” Amber said flatly. “I can’t.”

After being asked why, Amber said, “Because I’m high the whole time. It wasn’t happy moments of my life at all,” she continued. Amber then compared her watching Teen Mom to an alcoholic watching footage himself “back in the day being drunk, you know what I’m saying? That’s the only way I can explain it.”

She later agreed to at least talk about that time of her life. “I will talk about the past with you guys, but I’m not gonna watch Teen Mom clips.” 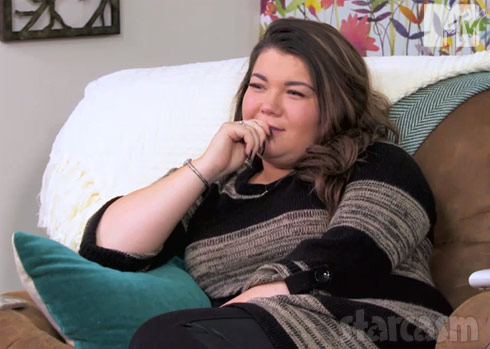 Of course, there wouldn’t have been much of a “Getting To Know Amber” special without all those memorable clips from Teen Mom, so MTV sent producer Kiki over to Gary Shirley’s house where he, his brother, his mom, and his girlfriend Katrina watched the Teen Mom footage and made comments.

Gary is not unaware of the situation, however. “This is stuff that Amber’s not watching, right?” he asked. “Yeah,” Kiki answered. “Well, that’s not fair,” Gary said.

After Gary’s segment, we revisit Amber who opens up about her time filming Teen Mom and her drug use, explaining that she was high the entire time MTV was filming after Leah’s birth.

Demonstrating their new commitment to completely breaking down the fourth wall between cast and crew for TV viewers, the main Teen Mom producer Heather got pretty emotional as she expressed her guilt over filming Amber during those difficult times.

“I’m sorry about everything,” Heather said.

“About what?” Amber asked.

“I just fee bad because I was there throughout all that stuff too. I always feel, like, bad about it.”

“For what?!?” Amber exclaimed. “MTV, the people that worked on it back in the day — there was nothing any of you guys could have done. Nothing.”

“I feel bad documenting her high and I didn’t, like, realize that,” Heather revealed. “I really didn’t know how crazy it was until — like, I just felt bad. I wish you had said, like, I don’t know — I wish we could have helped or something.”

“Everything’s good now,” Amber says. “This is why I don’t like watching this. This is the reason. It’s just — that’s my past, like, I’m never going to forget it, but it’s not — that’s what I went through in order to get to where I’m at today and I’m just fine with where I’m at today.”

The show also featured a sneak peek at Teen Mom OG, and unfortunately, it looks like Gary still has the ability to push Amber’s buttons as they get into a very heated exchange resulting in Amber screaming and kicking Gary out of her house. The big difference this time around is that Amber is sober, and hopefully she will be able to recover from these kinds of episodes and maintain the balance she has achieved since her time in prison.

PHOTOS Meet the players in the Amber Portwood vandalism scandal