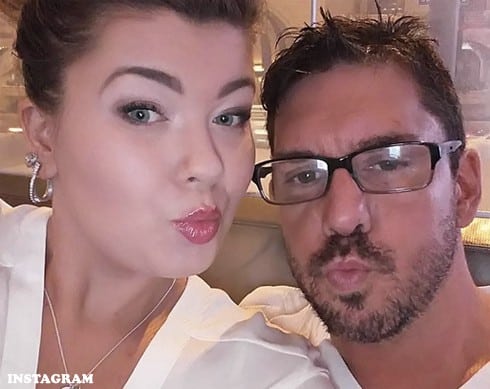 Amber Portwood has opened up about her fiancé‘s infamous tweets of admiration for fellow Teen Mom stars Farrah Abraham and Jenelle Evans as well as her own recent diagnosis of borderline personality disorder.

In an interview with Cosmopolitan, Amber dismissed Matt Baier’s hollas at the other Teen Moms as actions from his past while acknowledging that she thinks he was just scared to admit he was actually a fan of the show:

Honestly, he wasn’t trying to date them. He sent them messages pretty much telling them they’re beautiful and crazy stuff like that. There’s the truth and then there’s what people want to believe… This was all before [Matt and I] even started talking. That’s like when you’re with somebody and you say, “How many women have you slept with?” I’m not really mad about it or anything because I’ve been with the man for over two years, and we have a really good life together. There’s no doubt in anybody’s mind that this man loves me.

I swear to God, that man … He’s just an older man who doesn’t want to admit that he watched Teen Mom because all of his friends would be like, “You’re such a freaking wussy.”

Amber also continued to defend Matt in spite of his shady past:

“I feel like I’ve shown and proven who I am today compared to before, but it’s really hard on him because nobody’s giving him a chance to really say, ‘This is what really happened. Was I an a**hole? Yes. Did I lie about things? Yes. But this is me today with Amber.’ We’re very happy. I think people need to open up their minds and accept that people can change. He’s really a great guy who does nothing but take care of me.”

The borderline personality is a new diagnosis that I obviously don’t want to believe, but my therapist believes it. It’s hard. I was diagnosed with bipolar a long time ago. It’s really hard. I think people don’t quite understand what it’s like to be bipolar and then have something like borderline personality on top of it, plus you have anxiety disorder. I’ve just been screwed up since the beginning, which is a big reason why I used to self-medicate as well. I’m glad I have professional help now.

Here’s a definition of BPD via the National Institute of Mental Health:

Borderline personality disorder (BPD) is a serious mental disorder marked by a pattern of ongoing instability in moods, behavior, self-image, and functioning. These experiences often result in impulsive actions and unstable relationships. A person with BPD may experience intense episodes of anger, depression, and anxiety that may last from only a few hours to days.

As for whose Twitter handle Matt has tattooed on his stomach? Well…