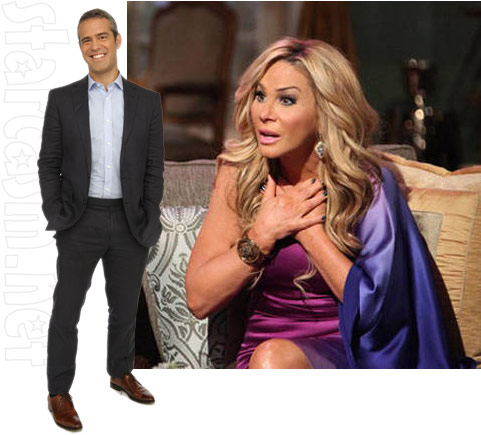 Adrienne Maloof is reportedly none too pleased with Andy Cohen’s comments about her opting out of The Real Housewives of Beverly Hills Season 3 Reunion — comments that included Andy saying “she stiffed me” and that he was “disappointed” and “frustrated” by Adrienne’s decision.

As you probably know, Adrienne had a bit of a rough time this season. She was very hurt and upset when Brandi Glanville announced that Adrienne had used a surrogate for her twin boys, especially because she had not had a chance to tell her boys that news herself. Then it was revealed that she and husband Paul Nassif were officially separated in last week’s episode. Adrienne, who has been with the show since the beginning, announced via her blog on March 4 that she was leaving the show and would not be returning for the fourth season:

“To my loyal fans… It was time to exit RHOBH. The show served as a wonderful platform for all the amazing projects that I have in the works.  I am forever grateful to my fans, thank you for your support, and stay tuned! xoxoA”

However, not only did Adrienne quit the show, but she pulled a Jacqueline Laurita and skipped the reunion show too! In a sneak peak of next week’s part one of the reunion, Andy addresses the elephant in the room: where’s Adrienne?

In the above video, Andy opens the reunion show with the following statement about Adrienne: “Today we are missing one of the housewives that has been with us since the beginning: Adrienne Maloof has decided not to participate today. This season was hard on Adrienne as you all know. A secret about her family was revealed by Brandi and from that moment on, Adrienne refused to speak directly about it. We know that frustrated you in the audience; it frustrated all of us, too. If you read the tabloids, you might have theories on what the secret is, but Adrienne won’t be here to tell her side of the story. Not only is she absent tonight, but she won’t be on the show next season. Adrienne Maloof’s final act as a housewife is not showing up tonight.”

Andy also spoke with Marc Malkin of E! at SXSW and said “she stiffed me” when asked about Adrienne’s Reunion absence. He then added:

“I was not pleased,” Cohen said. “Also, I feel it was bad for her because, why let six women have the last word on an entire season? I think she should have been there to speak her mind, and she may be surprised with some of the directions the conversations took.”

Adrienne apparently took issue with Andy’s statements as a source tells Radar Online, “Adrienne isn’t shocked by Andy’s behavior but she is disappointed by his comments… She knew she would have been thrown to the wolves though if she had gone to the taping, and quite frankly she is through with dealing with all the non stop drama and verbal assaults. Brandi and Lisa were both telling producers before the taping that they were looking forward to pouncing on Adrienne. She heard about it and decided there was no way she was going to let those b****es come after her like that.”

* If you watch The Real Housewives of Beverly Hills then you know the tight connection Adrienne has with Radar Online, so it might be pretty easy to guess who their “source” is.

Here’s a Reunion preview clip in which Brandi is talking about plastic surgery (ie “coming after her like that) and says of Adrienne, “What hasn’t she had done?”

Catch Adrienne’s final episode of Real Housewives of Beverly Hills on the season finale Monday, March 25, at 8/7c and part one of the reunion right after at 9/8c on Bravo.