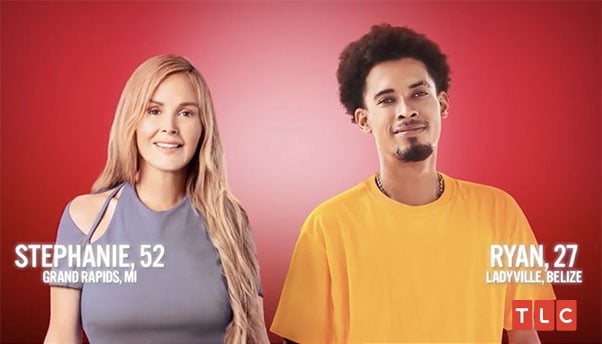 This week’s episode of 90 Day Fiance featured a disturbing scene in which Stephanie Davison gets very emotional after her Belizean boyfriend Ryan Carr lied to her about using a condom during sex. After the episode aired, an Instagram comment made by Stephanie in which she states that she was raped and plans to sue TLC began circulating online.

“These clusterf***s that work for this company are going to wish they never deceived me,” Stephanie wrote. “I not only was raped while filming, but manipulated to keep filming after I begged to get off set after being bitten hundreds of times by sand flies. But no, they just needed a romantic dinner filmed with Ryan.”

She adds that she has spent a great deal of time in the hospital “hooked to IV’s for the inflammation from the allergic reactions I had.” She says producers “are unwilling to pay all my medical expenses.” She concludes with the lawsuit claim. “My attorney started legal action today…stay tuned!!”

I wanted to clarify that Stephanie’s lawsuit looks to be solely in regards to her not being compensated for expenses incurred while filming, or as a result of filming the show — including medical bills stemming from her numerous sand fly bites.

Stephanie previously expressed her frustration with TLC and show producers over their refusal to reimburse her in a recent interview with The Celeb Talk Guy. [Full video embedded below.]

In the interview, Stephanie drops a bombshell by revealing that she and Ryan broke up prior to her filmed trip to Belize in October. She says that she told producers in “probably mid-August” that “Ryan and I have broken up.” She says that something changed in Ryan during the coronavirus pandemic, adding that it seemed like it was due to him “not having any money” and “not having any means to provide for his family.”

“I called the producer and I said, “We’re done. I can’t take it anymore.”

And they proceeded to say, “You know, we’ve put a lot of money into this, and…you know what, Stephanie? You’ve put up with his s-h-*-t for so long. You’re this close to, you know, something huge. Stick with it. You don’t know what you’d be throwing away.”

Stephanie says that producers would not take her no for an answer and they sent a crew to her hometown anyway. “They came to Grand Rapids and they waited around three days until I would change my mind,” she reveals.

She says that producers really pushed the idea that she would be getting a lot of exposure and could make a lot of money via platforms like Cameo, which surprises the interviewer. “I guess that’s, like, their big selling point to coming on the show is you get all this fame,” he replies. “That for me just sounds so surprising they would even talk about that,” he adds.

“Yeah, well, what else can they talk about?” Stephanie asks. “They’re surely not paying us a lot of money.” [It has been reported that first-time cast members make roughly $1,000 an episode, and the amount doesn’t go up very much if they return for additional seasons. Tarik Myers recently filed for bankruptcy and revealed how much he made last year, if you’re curious. This is despite the fact that the 90 Day Fiance franchise is currently the most watched non-competition reality series franchise on cable.]

#BeforeThe90Days #PillowTalk Tarik Myers filed for bankruptcy last month with nearly $500k in liabilities, including more than $124,000 in outstanding state & federal taxes! Plus, he reveals how much he got paid by TLC in 2020! #90DayFiance #90DayFinance https://t.co/39iy7pNGxP

The topic of cast members not getting paid very much turns to Stephanie’s frustration about not being reimbursed for expenses. She mentions having to buy plane tickets out of her own pocket because of a missed flight due to a camera man. And she also brings up the sand flies and the “thousands of dollars” in medical expenses she has incurred because of the bites.

I was bitten hundreds of times when I was there. That scene that night right before we went back into the room, I was bitten at least 300 times by sand flies…Everybody’s like, “Oh, sand flies. Big deal.’ Well, they carry something called leishmaniasis — look it up. It can destroy your organs. It can lie dormant in your body for years and then attack your organs.

So I’ve had a ton of blood work done. I’ve been hooked to IVs because I had such a severe reaction. It affected my vocal cords. I sounded like a cigarette smoker for months after that.

And the bills have have gotten to be extreme. I mean, they’ve had to…check my liver to make sure my liver isn’t damaged — all kinds of things.

Stephanie claims in the interview that the legal process had already started. “I have given my attorney the go-ahead, and he said, ‘Stephanie, let’s start with getting you thousands of dollars they owe you in expenses.'”

I checked Michigan court records and couldn’t find evidence of a lawsuit being filed yet. I assume it would be filed there as opposed to wherever Sharp Entertainment is located. I will try to remember to keep checking.

As far as the rape allegations mentioned in Stephanie’s Instagram comment, it is assumed that is in reference to Ryan lying to her about using a condom. I could find no mention of Stephanie intending to sue producers in regards to that incident.

Lying about using protection during sex is called “sheathing” and it is illegal in a number of places. (There is currently a bill in California that would make removing a condom without consent a sexual battery offense.) I do not believe it is against the law in Belize, but I cannot confirm that.

Stephanie has more than her fair share of detractors among viewers of the show this season, but most of them were vocal in their support of her in regards to Ryan lying about using a condom.

Instagrammer @90day_fiance_gossip shared a video clip of Stephanie explaining to producers what happened, along with a screen cap of her comment about suing TLC. The account summed up a lot of fans’ opinions in the caption.

“I truly believe what Ryan did to Stephanie was wrong on so many levels,” the caption reads, in part. “I wish Stephanie exercised more caution if she was soo scared of sleeping with Ryan because of his cheating. She should’ve pulled a Paul and asked him to get STD checked instead of taking the risk and sleeping with him anyway.”

A post shared by 90 Day Fiance Gossip And Memes (@90day_fiance_gossip)

Someone posted about the incident on reddit with the title “Stephanie was sexually assaulted.” The post has received numerous reddit awards and more than a thousand upvotes. It also sparked a very impassioned discussion in the comments. Here are some highlights:

u/84aomame [OP]: Don’t get me wrong, that woman is a train wreck but she initiated sex expecting him to wear a condom, verbalized that to him and was under the impression that he understood AND put the condom on. I absolutely believe that he made it seem like he put it on.

What he did is called stealthing, (non-consensual condom removal) and it 100% is sexual assault and not okay for him to have done. I hope she leaves him for good.

u/EnglishRose71: You’re absolutely right. She had every right to be absolutely furious. Even though she said they hadn’t used condoms during her past vacations, which was pretty stupid, she did have the sense to ask him to wear one after 10 months’ separation. What he did was deceitful, despicable and inexcusable. She needs to get tested for STDs the minute she gets home.

u/SpaceQueenJupiter: People are acting like, “well it was bad I guess, but she’s CRAZY and TERRIBLE!” Like sure, she’s not the greatest, but that’s a separate issue. You don’t get to only feel bad for sexual assault victims who are perfect.

u/blueberrysandals: This may be where I draw the line with TLC and the increasingly toxic fanbase. We all just watched someone breaking down after being raped. Producers did all they could to make her look stupid. People online laughed at her and still are (look at other post, they find this hilarious).

Other commenters pointed out that the 90 Day Fiance franchise has a history of airing controversial cast members and scenes. There have been numerous scenes in which women have physically assaulted men on the show, not to mentions verbal abuse by men and women. And, of course, there was the decision by producers to film Geoffrey Paschel just months after he was arrested after an altercation with his girlfriend that resulted in four criminal charges that included felony kidnapping and domestic assault.

We have some additional information about the June, 2019 domestic assault arrest of #90DayFiance #BeforeThe90Days Season 4 star Geoffrey Paschel, including the detrimental impact the arrest had on the custody of his four-year-old son. https://t.co/AnFKqpQZij

If Stephanie does end up filing a lawsuit against TLC and/or show producers, it won’t be the first time a cast member has done so. One of the franchise’s biggest villains, Season 3’s Mark Shoemaker, filed a defamation suit because of how he was portrayed on the show. A judge would eventually toss out the case.

Here is Stephanie’s full interview with The Celeb Talk Guy:

On a side note, I had difficulty finding photos or clips of Stephanie or Ryan on any of the TLC or 90 Day Fiance social media pages. There’s her intro clip, but that’s about it?

90 DAY FIANCE Ashley poses in a bikini in Houston, Jay watches her daughter back home