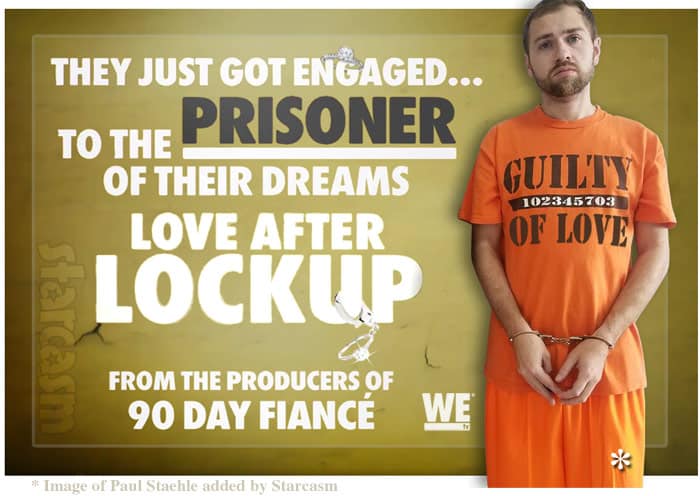 Producers of TLC’s hit reality series 90 Day Fiance are looking to put a new spin on their “finding love off the beaten path” theme with new show Love After Lockup. The series will document couples in which one (or more?) partner is currently behind bars, but soon to be released.

From the producers of 90 Day Fiancé
Love After Lockup
They just got engaged…to the prisoner of their dreams.
Coming in January.

And here’s the first clip:

Surprisingly, Love After Lockup will not be on TLC, which would seem like a perfect home, but instead will air on WEtv.

Because the teaser trailer didn’t provide much information, I tracked down the casting call for the series, which reveals at least a little bit more about what producers plan for the show: 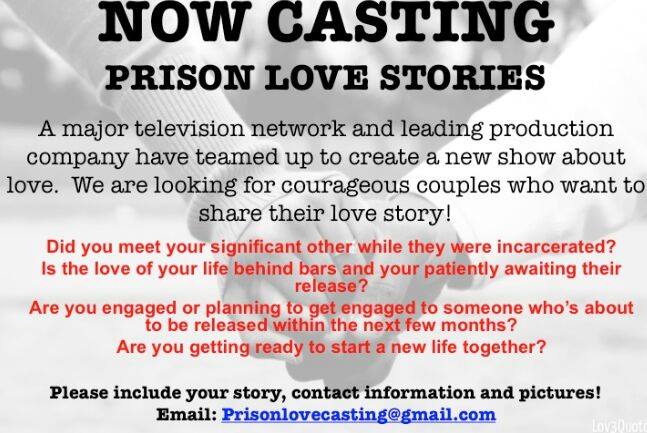 The casting call was posted in numerous prison relationship Facebook groups by a Sharp Casting Director, or by a member in contact with her. Here is the message from the casting person:

I’m a producer working on a docu-series following women who are or were recently incarcerated.

The goal of the project is to follow couples who are in relationships with someone “from the other side” and follow their relationship as the individuals assimilate back into society. I would love to tell you more about myself and the project and see is this is something your organization can help me out with or offer me some guidance.

Please feel free to call me at 212.***.**** so we can discuss in more detail or you can send me your contact info and a good time to call and I will reach out!

Hope to hear from you soon!

It’s important to note that the message was posted in a women’s re-entry program Facebook group — that’s why it only mentions women.

And here’s a message from an admin in another group who was contacted by the show’s casting director in which it is clear that they are looking for incarcerated men and women:

Are you in a relationship with someone who is incarcerated? Are they expected to be home in the next few months? Are you willing to have your love story documented?

She is aiming to follow several men and women who are currently in relationships with inmates to document how these relationships are put to the test when the inmate is released and assimilates back into society. The documentary will be a story about love, the hardships of love, and men and women fighting for their love.

I have to admit that, given this concept, it is VERY easy to imagine a show VERY similar to 90 Day Fiance, in that there could be a lot of familiar head shaking and “What is he/she thinking?!” moments. Plus, I think it pulls from a similar pool as far as folks who have had bad luck with relationships (for whatever reason) and who’ve decided that swiping through Mug Shot Tinder was a good option. There’s also the added bonus that fans won’t be able to complain (too much) about the cast members’ criminal pasts. 😉

We’ll be sure to keep our eyes open for updates on cast members, premiere date, and anything else related to Love After Lockup. In the meantime, for those of you who cannot wait to get your dose of prison romance, you might look up old episodes of Lifetime’s short-lived reality show Prison Wives Club. (Although most of the inmates on that show weren’t very optimistic about getting out any time soon.)

*NOTE: We added Before the 90 Days star Paul Staehle’s convict costume photo to the image at the top of this post for a little humor. As far as we know, there are no plans to feature Paul on Love After Lockup.