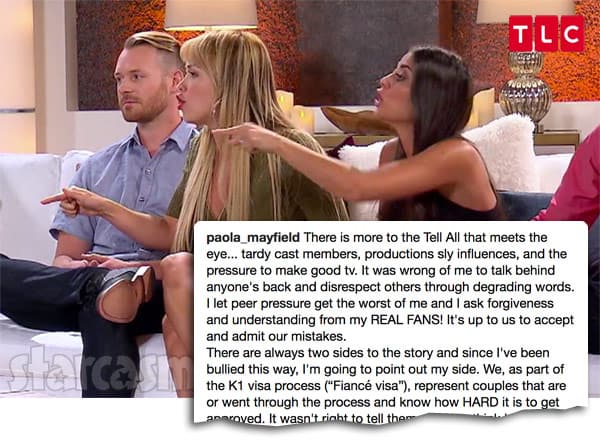 The three-part 90 Day Fiance: Happily Ever After Tell All special is not going how many people expected — at all! Anfisa had clearly emerged as the show villain over the first two seasons, and apparently her co-stars Paola Mayfield and Loren Brovarnik assumed they could team up from their moral high ground and attack her (as well as Danielle and Mohamed) with the same things being said by numerous fans in forums and on social media. They repeatedly accused her (and Mohamed) of not being here for “the right reasons” and continually attacked Anfisa’s physical appearance.

“Was she a mail order bride?” Pao asked Jorge. “You couldn’t find someone, like, better than her, because she’s not that pretty.” Pao later mentions that she read an article about gold digging academies in Russia where they train women to find wealthy men in America. (Alexei jokes that they probably have those in Colombia as well. Here in America we call it Millionare Matchmaker.) Pao asks Anfisa is she attended one of those academies. Anfisa replies “Yes, I took those classes,” before bursting out laughing and asking, “What do you want me to say?” 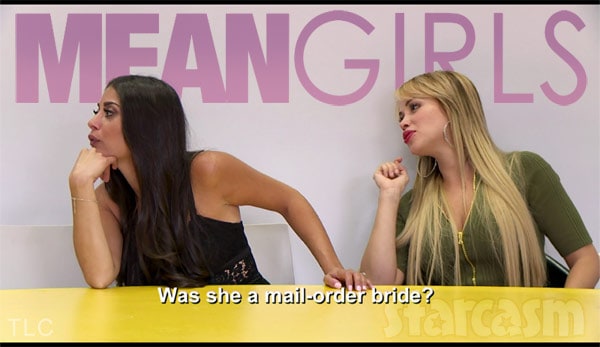 Pao and Loren (I will just call the duo Paoren from now on) continued their attacks, and Anfisa continued to laugh and shrug them off. This is when their ply started to backfire and public opinion began to sway in favor of Anfisa.

Unfortunately for Paoren, they were relentless — so much so that it seemed as though they essentially hijacked the hosting job from Shaun Robinson.

The bad poll numbers only got worse overnight, and this morning the show’s fan base was overwhelmingly anti-Paoren — with quite a lot of people rushing to the defense of Anfisa! WHUH?!

Pao must have been paying attention to the reactions online because she took to Instagram to post a lengthy apology for the way she has acted on The Couples Tell All special, blaming peer pressure and “production’s sly influences.”

“There is more to the Tell All that meets the eye… tardy cast members, productions sly influences, and the pressure to make good tv,” Pao begins. “It was wrong of me to talk behind anyone’s back and disrespect others through degrading words. I let peer pressure get the worst of me and I ask forgiveness and understanding from my REAL FANS! It’s up to us to accept and admit our mistakes.”

That apology seemed to be coming from a humble place, but Pao immediately went back to high moral ground as she assumes the role of bully victim before then going after Danielle and Mohamed as well as Jorge and Anfisa again for discrediting the K-1 visa process:

There are always two sides to the story and since I’ve been bullied this way, I’m going to point out my side. We, as part of the K1 visa process (“Fiancé visa”), represent couples that are or went through the process and know how HARD it is to get approved. It wasn’t right to tell them what we think because at the end we don’t know them any better than you do BUT it’s not right to make fun, take advantage of the visa process and make it look like a joke! For what reason? Money? Fame? Unfortunately, 3 of the 16 hours of filming is not enough to show EVERYTHING!

There is a huge difference between asking questions directly and giving our opinion face-to-face than what most of you are doing, which is insulting us by hiding behind a computer and calling us names. You talk about bullying but what makes you better than us by attacking us and hiding your face. This has come from defending domestic violence which is acceptable? people taking advantage of others which is fine? because people deserve and they are honest and to ask questions which now is considered bullying?

Again my sincere apologies my lovely and REAL FOLLOWERS, I hope you guys burned as many calories as I did watching the show this season!

Meanwhile, Loren has yet to respond to the backlash from fans — a backlash that includes The Tourette Association being inundated with people asking that they remove Loren as an ambassador! For an example of what I am talking about, just take a look at the comments section of their most recent Instagram photo:

A post shared by Tourette Association (@touretteassociation) on Aug 31, 2017 at 2:11pm PDT

On a more Paositive note (see what I did there?), Pao is currently competing for Maxim’s Finest 2017, which includes a $25,000 modeling contract and a two-page spread in the magazine. “I want to influence and help empower others in a positive way,” Pao wrote in her statement. (Russ will be pleased to know that she is not wearing lingerie in any of her photos.) 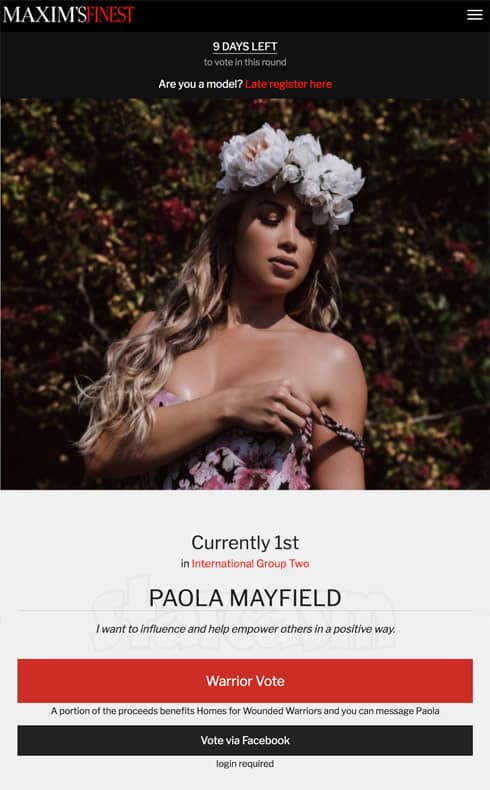 I did a little research on the Maxim‘s Finest competition and it appears as though there are 100 groups with close to 50 women in each group. (The experience of scrolling through was MIGHTY intimidating. SOOOOOOO many bikinis and boobs! It really is too much.) Pao is currently in first place in her division, but she has a long way to go yet.

As crazy as the 90 Day Fiance Happily Ever After: The Couples Tell All special have been, we still have 33% left to go! Be sure to tune in Sunday night at 8/7c for the grand grand finale!