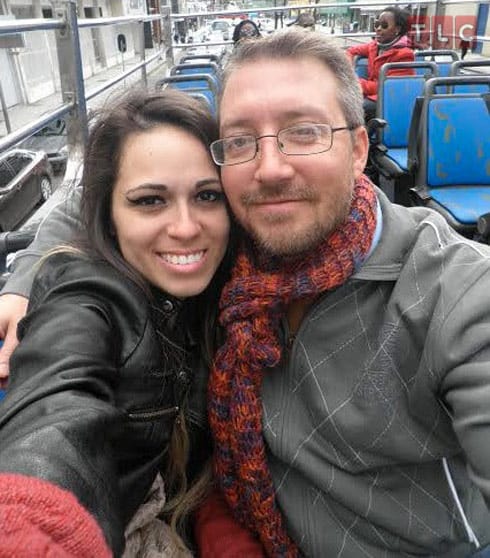 On Friday, which was one day before their four-year anniversary, 90 Day Fiance couple Jason Hitch and Cassia Tavarez were in court in Florida to finalize their divorce. We spoke with Jason, and he tells us that he got the official letter of confirmation from the clerk on Saturday — their actual anniversary.

UPDATE – According to court records, the divorce was officially entered into the record on October 26.

The divorce comes after numerous splits and reconciliations for the couple, who withdrew their previous divorce filing earlier this year.

Despite all of their struggles, both Jason and Cassia are keeping things positive as both embark on their post-marital journeys. “I’m relieved for ending this chapter of my life,” Cassia tells us, “and I am excited to see what the future holds in store for me. I’m ready to spend my time with family and friends to heal myself and I wish Jason luck on his plans.”

Speaking of Jason’s plans, those include a one-year deployment to Iraq beginning in January. He tells us that he switched units and plans to be in Iraq throughout 2019 providing logistics and support to the Iraqi troops. He is excited for the opportunity and looking forward to a potential promotion.

We asked Jason for his thoughts on his former spouse, and he is confident that she will land on her feet. “Cassia is one smart young woman,” he says. “She has two degrees and her good looks. She’ll be fine.”

As we previously reported, Cassia graduated from the University of South Florida earlier this year, and she certainly seems prepped to take the world by the horns! The 27-year-old tells us that she is ready to move on from Jason, and especially from 90 Day Fiance. “I respectfully request that people not ask me anything about my past relationship with Jason (since it is something I am leaving behind) or about the show, because I haven’t been part of it for years and I have no interest in talking about it.” She shares a preemptive “Thank you!” to everyone who complies with her request.

We’ve been big fans of Jason and Cassia ever since they (and Jason’s Swiffer-lovin’ dad and their El Camino) first graced my TV screen four years ago. I know it has been a difficult couple of years for them, and I want to wish them both the best going forward.

Paris Hilton and boyfriend Cy Waits split up, “The World According to Paris” to blame?