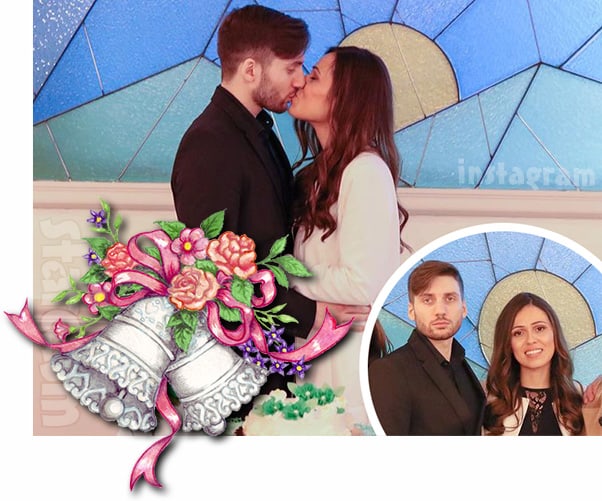 Congratulations are in order for 90 Day Fiance Season 2 star Cassia Tavares! A little more than two years after her divorce from co-star Jason Hitch was finalized, Cassia has tied the knot again — this time with her Italian beau Giuseppe!

Cassia broke the news on Instagram with a series of photos from the ceremony and the dinner afterward.

“We got married at the courthouse today!” Cassia began her caption for the gallery of wedding pics. “Sadly, we couldn’t do a bigger ceremony because of COVID,” she continued. “Also, his mom hasn’t been feeling well for some days now, but she made an effort to be with us.”

Despite the pandemic and Giuseppe’s mom being a bit under the weather, Cassia said “today is a special day that we’ll cherish forever.”

Cassia went on to reveal that she and her new in-laws had an Italian style lunch together after the ceremony that included a small cake. She concluded her caption with praise for her new hubby, and perhaps a slight dig to her previous spouse? “I’m so lucky to have Giuseppe as my husband, a man raised with great values, kind, polite, respectful, that always makes me feel loved!” she fawned. “I love him so much. He’s truly one of a kind.”

Giuseppe responded in the comments of the gallery in Italian. Here is the Google translation:

Best wishes to us, to what we have built up to now despite the countless difficulties we have faced. Even if from the photos we do not seem “happy” it is simply because a moment as beautiful as this union cannot be celebrated as we would like due to everything that is happening in the world, but despite this we are happy to belong to us, to have taken this step as well important to us, and I’m happy with the wife next to me.

Congratulations to Cassia and Giuseppe! As we’ve said many times before, Cassia is one of our favorite 90 Day Fiance cast members, and we’re extremely happy that things appear to be going so well for her — including her college graduation!

After her split from Jason, Cassia was a bit reluctant to share much about her life online. That has changed a bit recently as she has joined TikTok and even posted a YouTube video addressing fans’ questions about whether or not 90 Day Fiance is fake.

In the five-minute video (embedded below) Cassia says that the couples on the show are real, but a lot of what viewers see on screen is either scripted, or heavily edited, or both. Here are some examples from her experience on the show:

MEETING JASON AT THE AIRPORT IN RIO

Cassia explains that the scene in which she tells Jason she will not meet him at the airport was heavily edited. “Let me tell you the background on that story,” Cassia begins.

“When [Jason] asked me the first time to be on the show, I said ‘no.’ And then he would ask me and ask me for a month until he convinced me, and on that call he said it was a possibility that cameras would be in Rio.” Cassia continues: “I wasn’t comfortable with that. I told him, ‘Hey, if the producers are going to be at the airport with you, I’m not going to meet you.’ They edited that, and the result was what you guys saw. This situation about the airport wasn’t scripted, but it was edited very well so they could fit the storyline.”

#90DayFiance Season 2 couple @hitch4life and @cassia__br are officially divorced almost four years to the day after getting married #EXCLUSIVE https://t.co/HxJMCUEW0o

Cassia says that the pregnancy test scene was completely scripted. She says she had tweeted something on the day of filming about feeling nauseous, and that inspired producers to go buy a pregnancy test and have her take it for the show. “It was 100 percent scripted,” Cassia says. “I knew I wasn’t pregnant. Everybody knew.”